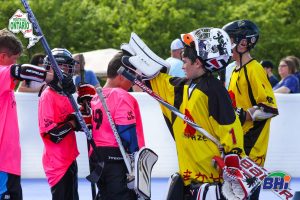 Brantford, ON – The weekend of August 12-14, 2016 Ball Hockey International’s Brantford location will host the fourth and culminating tournament of the Youth All Ontario Cup (YAOC) ball hockey tournament program. Previous to this event, tournaments have been held in St. Catharines, London and Welland at the Ball Hockey International locations in those cities with teams participating from across the province in the Midget (1998-2000), Bantam (2001-2002) and Peewee (2003-2004) age groups. Teams finishing in first or second in the three preliminary tournaments have received invitations to the Weekend of Champions tournament but the event is also open to entries from teams not receiving invites.

Here is a look at some teams to watch at the Youth All Ontario Cup Weekend of Champs!

The Knights have a strong cast of players that have been regulars in the YAOC for many years moving up through the divisions. After dominating in the Bantam division, the Welland Knights have become a contender in the Midget division led by Danial Legault, Nick Villella, Nolan Lynds and goalie David Legault. The Welland Knights finished first in the Spring Teaser and July Jammer.

The Cherry Pickers are also no stranger to the YAOC having played for several years together building a strong chemistry between their core players and adding complimentary pieces along the way. The Pickers are led by Tycie Cowan, Shaun General, Connor Charles and Richie Little. The Cherry Pickers finished second in the Summer Showdown and July Jammer and will be looking to win big at their home rink.

The Warriors, much the other two teams profiled have played their way through the YAOC with many of their core players graduating out of the division at the end of the 2016 YAOC season. The Warriors back bone is made up of Brendan Crosby, Mackenzee Mcqueen, Colin Capstick and Spencer Bak. The Warriors finished first in the Summer Showdown tournament.

The Welland Bandits have enjoyed a strong YAOC thus far winning the Spring Teaser back in April in convincing fashion against Brantford SWAT. A few months later they travelled to London for the Summer Showdown they lost in a goal scorers dream 8-5 to the Welland Rebels. They are certainly a team to watch led by Adien Dube and Easton Pummell.

The Rebels have played in all three of the preliminary tournaments in the 2016 edition of the YAOC, winning the Summer Showdown in London and coming in second at the July Jammer just recently hosted by BHi Welland. Welland Rebels will be a force to reckon with at the especially with Anthony Legault, Jacob Murdoch and Eric Joyce in the lineup.

The Titans are a new team this year to the YAOC and they are certainly making other teams in the division stand up and take notice.  After going undefeated in the July Jammer tournament they will look for repeat performances from Carson Eden, Jacob Bonna and Damon Ford during the Weekend of Champs.

The Rampage are a staple in the Peewee division and continue to play competitive ball hockey no matter what tournament they enter. After winning the Spring Teaser in St.Catharines the Niagara Rampage lost in the semi finals of the July Jammer despite a strong effort all weekend. Players to watch are Mason Nothern, Spencer Main and Josh Salvi.

The Kamikaze burst on to the YAOC scene during the Summer Showdown tournament in London proving they are strong contender for the 2016 crown. In the two tournaments they have played in (Summer Showdown & July Jammer) they are a perfect 10-0 and have outscored their opponents by a score of 63-10. The Kamikaze will count on strong performances from Logan Ferreira, Matthew Szabo and Matt Dixon .

SWAT have participated in two of the preliminary tournaments in the 2016 YAOC. At the Summer Showdown tournament in London, SWAT drew a tough match up in the finals losing a close 5-3 game to London Kamikaze. At the July Jammer, hosted by BHi Welland, SWAT had a tough round robin schedule and did not advance to the playoffs despite a strong tournament performance. Brantford SWAT will be looking to bounce back from their recent performance on home soil relying on William White, Issac Cherewka and Alex Mercy to lead the way.