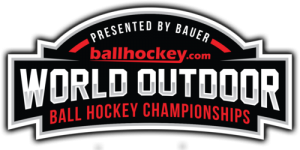 The last legs of the World Outdoor Ball Hockey Championship (WOBHC) took place this past weekend at the Ballhockey.com Niagara Ball Hockey Club in St. Catharines, Ontario. This tournament saw competition in Coed Comp., Coed Open, Men’s D, and Men’s Over 35 divisions. There were a few familiar faces at this tournament, but did any of them take home the gold? Read on for our full rundown of the standings of the Niagara chapter of this year’s WOBHC. 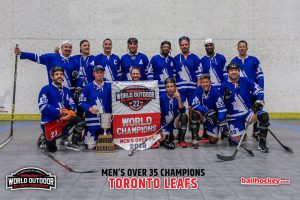 Right out of the gate, Niagara Nitro was a team to watch out for in this division. They were on fire and looked like they couldn’t be stopped by anything. They won each of their games through the semi-finals until they came up against the Toronto Leafs in the championship game. The Leafs had also put on quite an impressive display, the only hitch in their record being when they tied up their game with Milton Flash. Due to their almost equally impressive records, it was unclear who would take the final game, but in the end the Leafs pretty much dominated the floor, taking the win with a score of 4-1. 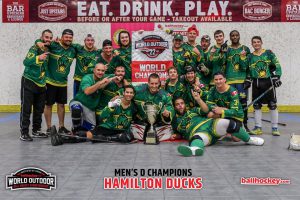 The Men’s D division had some familiar teams out in competition that we were excited to see play, like the Hamilton Ducks, Steel City Vikings, Hamilton Knights, (actually, quite a few teams out of Hamilton). All in all, there were sixteen teams playing in D division this tournament, so even though we knew what some of the teams were capable of, we were excited to see what some of the lesser known teams would be bringing to the table. That said, the Hamilton Ducks managed to own the floor over the weekend. They ran through the preliminary round taking the win in all of their games played, a trend that would continue through the championship game against the Steel City Vikings, a game they won handily with a score of 5-0. 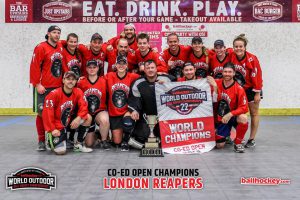 There were fewer teams in the Coed Open division this weekend, which meant tighter competition. The Barrie Warriors and Beastie Boys and Bitches put on impressive displays, but there was still room for some surprises out of the tournament. The London Reapers, who early spectators of the tournament might have overlooked as ‘down for the count’ made a remarkable comeback once the semi-finals rolled around, dispatching the Beastie Boys and Bitches with a 2-0 shutout, before eking out a win against Barrie Better Together in the final with a score of 3-2, making them the Coed Open champions. 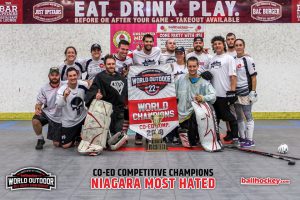 The Competitive Coed division had one more team in the fray than the Open division, but that didn’t change the level of competition much. The games were still tight, and the players needed to be on their toes. We were excited to see some games out of London Norstar after their Women’s A win during the last leg of the WOBHC tournament, but the player change might have been too much for them as their performance was not on par with what we saw in Barrie. Instead, it was the Niagara teams we had to watch out for this time around. The Most Hated and Goonies played some great games of hockey which pit them against one another in the final game. This was a tight one, but Niagara Most Hated ended up taking the win with a final score of just 1-0.

And that was it for the WOBHC. There was a ton of healthy competition out of both the Niagara and Barrie iterations of the tournament, with enough room for some surprise outcomes. Congratulations to the winners of each of the divisions on your hard-fought games.