Although the Walter Gretzky Street Hockey Tournament is a fundraiser event, it was tough to miss the high calibre of teams registered to play.  With names like The Gulls, Reapers, and Lightning in the mix, we had to check out some of the action this past weekend at BHi Brantford.

The Men’s Competitive Division featured 7 strong teams vying for the championship.  The round robin was incredibly competitive, even the odd lopsided win was not indicative of the on-floor play.  At the end of the round robin, the standings looked like this: 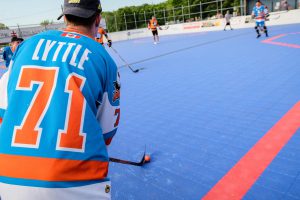 With the top 4 teams advancing, this set up some great match ups with each team showcasing a spiffy 3-1 record.  In semi-final 1, which featured the Reapers (1) vs. the Hawks (4), the Reapers won in convincing fashion with a 7-1 victory, allowing them to advance to the final.

In semi-final 2, the Gulls (2) would take on the BC Jets (3).  The Jets had beaten the Gulls 4-3 in the round robin however, it would be the Gulls who would take this match up 4-2 to punch their ticket to the final and take on the Reapers.

In the final, the Reapers would avenge their 3-1 loss to the Gulls on Saturday with another convincing 7-4 victory, earning them the 2018 Walter Gretzky Street Hockey Tournament Men’s Competitive Championship crown.