The final weekend of August is in the bag, and the excitement of summer is starting to taper. Kids are heading back to school, and the weather is starting to cool down. Of all the ways we could have sent August off, though, catching the Ontario Ball Hockey Association (OBHA) Summer Provincials was one of the best. The weekend was chock full of exciting play, and some unexpected outcomes. Between it, and the Ontario Ball Hockey Federation (OBHF) Men’s Masters 31+ & C Provincials, there was a lot of action happening this weekend. Don’t worry, if you happened to miss any of it we’re here to fill you in on what happened.

One thing we can say about the OBHA Summer Provincials is that there was a lot of parity in the matches. 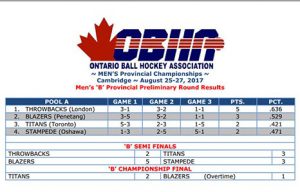 As you can see in the standings following the round robin, several of the games were quite close. One nail-biter in particular was the first game between the London Throwbacks and the Toronto Titans, ending in a score of 3-2 for the Throwbacks. 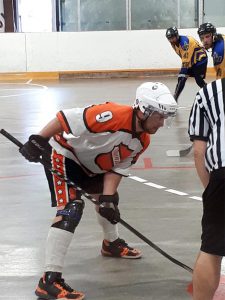 Craig Wood after scoring a beautiful goal for the London Throwbacks

The Throwbacks and Titans played a rematch the following day however, and the roles were virtually reversed. Despite a marvelous goal from BHi’s Great Britain Heritage Team’s own Craig Wood, with a beautiful assist from Travis Parkin, the Throwbacks ended up losing the game. The Titans seemed to have really stepped it up after feeling out the Throwbacks during their first game, and were able to capitalize during a power play. Their performance won them the game and moved them into the Final on Sunday against the Penetang Blazers, who turned what seemed like a losing game into a pretty substantial win, with a final score of 5-2. This was not only an impressive comeback and an unexpected end to the game, it also sent a message that they would be bringing some serious competition to the tournament.

Titans, and of all the games that we witnessed this weekend, this one was definitely the most harrowing. Neither team was keen on letting the other make any sort of progress. Like many other games throughout the tournament, the beginning of this one was a heated back and forth. Eventually, the Blazers scored the first goal, but were unable to hang on to their lead for long. Soon after, the Titans tied the game up, and the game remained at a stalemate all 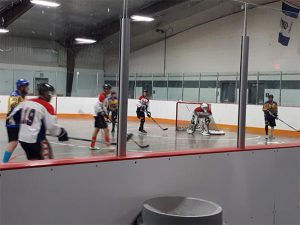 The Toronto Titans face off against the Penetang Blazers

the way through the second period, forcing overtime. It was obvious that the stagnant score was starting to wear on the players, and there was some rough play starting to occur. Eventually, the Blazers took a penalty, which was the opportunity the Titans were looking for. They scored, winning them the top spot of the Men’s B division of the OBHA Summer Provincials.

Below are the final standings for the Men’s C, D, & E Provincials. 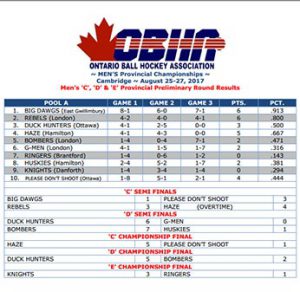 For a full list of the team’s stat, head on over to ontarioballhockeyfederation.com

As the summer winds down, it was great to be able to catch some ball hockey that was truly unpredictable. Congratulations to the Toronto Titans for taking home the OBHA Men’s B Summer Provincials first place trophy, and to all the teams who took first place in their respective divisions at the OBHF Provincials.

For the latest updates in all things ball hockey, make sure to stay tuned to Stickskillz.com and don’t forget to like us on Facebook and follow us on Twitter for up to the minute developments!