One of the biggest games at the 2018 World Ball Hockey Federation (WBHF) Championship took place tonight, and we were lucky enough to catch the action. We knew going in that Team Canada and Team Czech Republic were going to be two heavy hitters again this year, but we didn’t anticipate how heavy. This game was a rager right from the start, the sweat was pouring, and maybe even a little blood was shed by the end of the game, but it all made up for one exciting match of ball hockey.

You could tell that this was going to be a fast-paced game of ball hockey right from the start when both teams exploded onto the floor. Being the final two teams in last year’s tournament, Canada and Czech Republic both knew that neither side was going to take a loss without a fight. And fight they did. This is one of the rougher games we’ve witnessed in recent memory. Tempers typically flare at a tournament like this, but it honestly seemed like there wasn’t a moment of the game where someone wasn’t in the box for roughing. In the early goings of the game, Team Canada managed to use this to their advantage however and capitalized on a 4 on 3, scoring the first goal of the game. Not to be outdone, Team Czech Republic bounced back, and pulled the exact same move with a 4 on 3 in their favour tying up the game. Canada would answer right back, scoring a power play goal at 3:18, giving them back the 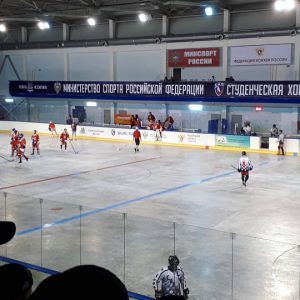 lead, 2-1. However, the Czech Republic would add their second of the game with just under 1 minute remaining in the period and the teams would move into the second tied 2-2.

With all the game stoppages and penalties, the second period of the game stretched on for quite some time. That said, Canada took the lead with an early goal bringing the score to 3-2 and were able to hold onto it for the entirety of the period. Team Czech Republic was coming at them from all sides, but Canada was able to hold their own, and they weren’t giving up their lead easily. The Canadians would take a 3-2 lead into the final frame.

In keeping with the game’s theme however, Team Czech Republic tied the score up 3-3 at a pivotal moment in the third period. However, Canada did not roll over, and with four minutes left on the clock, Team Canada scored a beautiful top shelf goal, and then hammered the last nail into the coffin two minutes later to finish the game with a final score of 5-3.

These teams put up a hell of a fight, and it was a great game to cap off the first day of the 2018 WBHF Championship. Russia also played Slovakia today, and took with win with a score of 6-5.