As we headed into this past weekend we knew that we were going to be in for quite the show at the Clash of the Titans Tournament. The name of the tournament alone evokes images of ball hockey giants battling it out to prove that they’re number one. With teams like the Niagara Rebels, Brampton Express, and the Pittsburgh Gods on the tournament’s roster, how could we not help but get excited for some of the matchups we were going to see? We were lucky enough to attend the last day of the tournament and catch the nail-biting semi-finals and, of course, the ultimate game which would determine the champion of one of the last tournaments we’ll see in 2017. We’re not the only lucky ones though, You’re lucky too! You, dear reader, get to sit back and read this, our Clash of the Titans wrap-up, to get all caught up on what went down last weekend! Let’s get started.

Heading into the semifinals, we weren’t exactly sure who we expected to rise to the top. Taking a look back at our Clash of the Titans Preview, we lauded the Metro Orangemen for the terrific season that they’ve been having in the Tier 1 division (after last week, they’re still sitting in first place. Update here) but were surprised to find they didn’t make it to the final games. We were pleased that we were able to witness some diametric playstyles. Getting to see how the U.S. teams play against the Canadian teams is always a treat, and Hell, two of the three American teams made it all the way to the last three games. Yes, there were some exciting games, and some great displays of hockey on Friday and Saturday, but when it came down to it, only four teams could make it to the semi-finals. The semi-finalists were the two American teams that we mentioned, the Pittsburgh Gods and the Boston Saints, last year’s tournament champions, the Brampton Express, and the boys playing on their home turf, the Niagara Rebels.

The first semi-final game of the tournament saw the two remaining American teams having it out. This was an exciting game, not only because it meant that the tournament was really coming to a 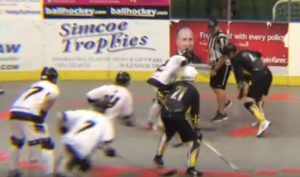 head, but because we got to witness the play-styles of two top tier U.S. teams – something we don’t get the privilege of seeing as often as we’d like to in person. Both teams are physical and fast, and that showed throughout the first period of the game. You’d be forgiven for losing track of the ball a couple times during this game (we know we did) as it was back and forth over the red line repeatedly. What was nearly a scoreless first period was turned around by Drew Albright of the Pittsburgh Gods who managed to score a beautiful goal with just a minute forty-five left in the period to put them into the lead, and set the stage for how the rest of the game would go.

Just two short minutes into the second period, and the Boston Saints would answer Pittsburgh’s goal to even up the score. The game would sit at a tie for the remainder of the second period, as control of the ball would change hands over and over again. As the third period began, it was still massively unclear as to who would end up taking the win, but within seconds the Gods tipped the scales in their favour, scoring a goal to put them into a lead they would carry right up until the final minutes of the game where they would score during a 4-on-4. The Pittsburgh Gods won the game with a score of 3-1, and would move onto the championship game.

This was another high-energy game that experienced a good bit of back and forth. The goals started 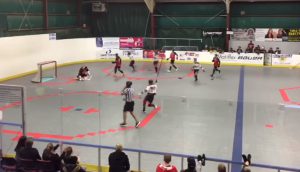 flying a little earlier in this game though, and just two minutes into the first period, Adam Bevilacqua of the Express put the first number on the board and brought his team into the lead. Seconds later, the Express would score again, bringing them to a 2-0 lead. The goals wouldn’t go unanswered by the Rebels though, as Tanner Pagendam was able to capitalize on an opening in the net and get the Rebels up on the board. Before long, the Rebels were able to tie up the game, capitalizing on a power play. The even score wouldn’t last long, as the Express would take the lead again quickly after. The Rebels didn’t give the Express much time to celebrate however, as they scored one final time before the end of the period, bringing the game to a tie heading into the second period.

One thing we’ll say about this game is that it was absolutely relentless. As soon as you thought one team had gathered some momentum, the other team would come along and take it from them. It was an almost exhausting back and forth, but within the first minute of the second period, Brampton had managed to pull themselves, once again, into the lead. At this point they were not only able to hang onto this lead, but they would score again a few minutes before the end of the second period. This may have been the last nail in the Rebel’s coffin as the score remained at 5-3 for nearly the entire duration of the final period before the Express would score again with only five minutes remaining. The Rebels were unable to recover from the three goal deficit, and with just a minute and a half left in the game the Express scored, winning the game with a final score of 7-3. The Brampton Express would go on to face the Pittsburgh Gods in the Championship game of the tournament.

We’d love to say the final game of the Clash of the Titans tournament was the most exciting game of the event…especially after the stellar shows put on by both finalists in the previous games. This did not turn out to be the case however. Right out of the gate, Shawn Hannon of the Brampton Express 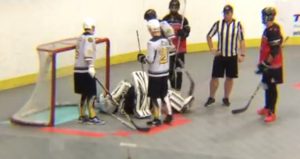 scored on a wide open net, which would set the trend of the rest of the game. Following this goal, Pittsburgh managed to control the ball for a good portion of the first period, but they couldn’t seem to make the shots where they counted. With seven minutes left in the first period, Michael Vitro scored once again for the Express. Shortly after the Express’ second goal, one of their players collided with the Gods’ goalie, John Rethage, which put him in a noticeable amount of pain. This put a hamper on the defensive capabilities of the Gods. Kudos to Rethage, who was trying to hold his own after sustaining injury, but Before the end of the Period, Marquis Mentis and J.K. Gill both managed to score, bringing the Express to a lead of 4-0.

Early on in the second period, Bobby Sokol scored for the Pittsburgh Gods, but the team just couldn’t keep the trend going. The 4-1 deficit coupled with the discouragement of an injured goalie was doing nothing for the team, and the game hung at 4-1 throughout the remainder of the game. The Brampton Express took the lead early on, and hung onto it, and that hoisted them into the position of ‘Two-Time Clash of the Titans Champions!’

Congratulations to the Brampton Express who walked away with the number one spot, and a cash prize of over $8000, and to the Pittsburgh Gods for taking second and over $2000 in cash. The Clash of the Titans Tournament presented by Bauer really managed to live up to its name this year, and brought some of the biggest names in ball hockey together for some truly exciting games! This tournament was an excellent way to send off 2017, and we can’t wait to see what’s going to come out of next year’s games! 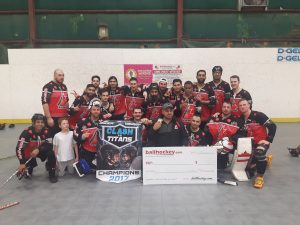