Last weekend, Jan. 19th-21st saw one of the first ball hockey tournaments of 2018. The Niagara Winter Classic, held at the St. Catharines BHi rink, hosted some top-tier ball hockey, as a great way to kick off the new year. With teams playing in Co-ed, Barn and Intermediate divisions, there were players of all skill levels coming out to compete for the top spot. Going into the tournament, we made some predictions as to what some of the more exciting match-ups would be. Were we correct? You’ll just have to keep reading to find out!

There were definitely some heated games in the co-ed division, and enough room for teams to develop something of a rivalry. The division featured four teams, and at the end of the round robin, the standings shook down like this:

After two lopsided semi-final games, the championship game between The Matt Coffeyes and SPK was tense, and it 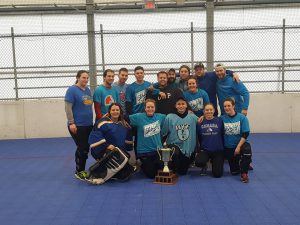 was a close game to be sure. The Matt Coffeyes came out strong with the first goal of the game by Kat Jegg, Austin Marck with the assist, but Brock Staley of the SPK quickly answered to tie the game up. The same would happen during the second period. First Kylie Dempster of the Matt Coffeyes would score with another assist by Austin Marck, then Jen Coombs of SPK would tie it up with an assist byFulsom. This was quite the rally, but in the end, Austin Marck managed to score the game winning goal with an assist by Kat Jegg, and SPK was unable to recover. The Matt Coffeyes had an impressive showing this tournament, and earned their title as champions of the co-ed division. Congratulations as well to SPK who came second, and the Red Eyes who came third.

The Barn division saw its share of close games as well. We were really excited to see how the Lincoln Blades would perform after their stellar showing at last year’s Weekend of Champs tournament, and they did not disappoint. By the end of the round robin, this is where the teams were standing. 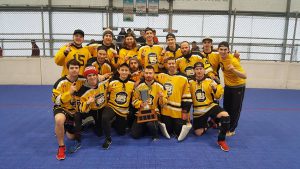 The championship game came down to a rematch between the Stealers and the Blades. This was an intense game. The teams were evenly matched – a notion enforced by the fact that their previous game resulted in a tie. The Lincoln Blades would make the first move, as Chad Upper would score a goal with an assist by Taylor Kostiuk. There was some heated play after this, but the remainder of the first period was scoreless.

Kurtis O’Toole of the Lincoln Blades managed to score the second goal of the game at the start of the second period with some help from Tanner Lansky. The Stealers’ Ken Mclean was able to score once, and got his team up on the board, but it wasn’t enough to combat what the Blades were dishing out during the championship game. The Blades would keep their lead through the remainder of the second period, and the entirety of the third. The game ended with a score of 2-1 for the Lincoln Blades.

The Blades made it all the way to the final game of the Weekend of Champs tournament, so we knew they’d be coming out in full force again at the Winter Classic, and we’re happy to report that they didn’t disappoint! Their victory against the Stealers cemented them as the first-place team in the Barn division, and as a team to watch out for. Congratulations to the Stealers, who took second place, and the Thunder Buddies, who took third.

We were definitely interested in the action coming out of the Intermediate division. We had speculated that the Wasted Talents were going to be bringing some heat, and expressed our excitement at the thought of the London Throwbacks v. Hamilton Outlaws game – especially given the fact that the Outlaws had risen two divisions since we last saw them play at the Weekend of Champs. There were some close games, and some surprising moments, but that’s all to be expected out of top-tier ball hockey play.

The Niagara Selects ended up being a team to really watch out for over this tournament, which surprised us considering they started out with a loss against the Wasted Talents, and a tie game against the Hamilton Outlaws. There was a surprising level of parity across the teams in this division. Heading into the semi-finals, both the Outlaws and the Wasted Talents were sitting at two wins, and the Throwbacks with one.

The first semi-final game for the division came down to the Throwbacks vs. the Wasted Talents, and it was a tight one. The Wasted Talents came out strong with a goal by Wade Stafford, assisted by Daniel Legault, but the Throwbacks answered pretty quickly with two goals of their own, scored by Brandon Dymond and Dan Green (assists by Chad Asselstine and Sam Thompson) before the end of the first period. This back and forth lasted the entirety of the game. The Wasted Talents would score, and the Throwbacks would answer – until the third period ended in a 4-4 tie. This was where the real nail-biting began. The game moved into OT where there was some explosive energy until Dan Ruddach of the Throwbacks managed to score the goal that would move his team into the championship game.

We weren’t expecting the second semi-final game of the division to be as exciting as it was. Since the Selects had yet to secure a win, and the Outlaws were on something of a tear up to this point, we thought that the game was going to go to the Outlaws pretty easily. We’ll learn to stop predicting things around here one day though, as this heated back and forth game did not go the way we anticipated. The first period was score heavy, as the Selects scored two rapid goals. The Outlaws weren’t about to let that stand though, and they fired back with two goals of their own. Bound and determined, Marshall Boyes of the Niagara Selects scored one final goal before the end of the first period with some help from Cameron Smith to give them a 3-2 lead.

Early into the second period, Jake Archambault of the Selects managed to score again, giving them a 4-2 lead. They would hold onto this lead for about half of the period before the Outlaws scored again. They were closing the gap, but the game was still heading into the third period with a score of 4-3 for the Selects.

After only two minutes into the third period, the Outlaws scored to tie it up, and the game sat at a score of 4-4 for nearly the remainder of the third period. With just two minutes left in the period however, Braydon Bourdon of the Selects scored what would end up being the game winner with some help from Brandon York. The Outlaws couldn’t make the recovery they were looking for in the time they had left, and the Selects were moving on to the championship game. 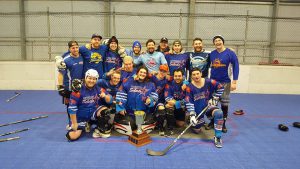 Image of the Intermediate champions: The Niagara Selects

Talk about surprises…we were absolutely not expecting the outcome of the Intermediate championship game between the Throwbacks and the Selects. After a scoreless first period, the Selects opened the door for themselves with a goal by Justin Harvey (assisted by Chase White and Pork Myre), and then went on a tear from which they couldn’t be stopped. From the first minute to the last seconds of the third period, the Selects scored goal after goal. The Throwbacks’ Andrew Boyle managed to get his team up on the board in the final seconds of the game, but it wasn’t enough to pull the team back from their 4-0 deficit. The Niagara Selects essentially came back from obscurity with a final score of 4-1 against the London Throwbacks, winning them the Intermediate championship! Congratulations goes out to the Throwbacks for placing second, and the Outlaws third – some great games of hockey were played by all.