Over the weekend of March 23rd through the 25th, some of the heaviest hitters in the world of ball hockey met up in Trevose, Pennsylvania to battle it out during the Cool Hockey Events North American Ball Hockey Championships. With the Men’s C, D, Novice, and Coed A & B already completed over the first week of the tournament, it was time for the Men’s A & B and the Women’s A & B teams to meet, and fight to take home the title of champion. There were a number of exciting match-ups but, of course, in the end only one team could come out on top for each division. We intend to fill you in on exactly who those teams were, so read on for our wrap-up of the 2018 NABHC Tournament.

Right out of the gate, last year’s finalist, the Chicago Lady Cobras appeared to be the team to beat going 4-0 in the 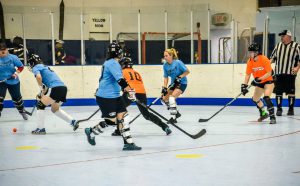 round robin. However, with strong teams like the Steel City Bombers (3-0-1), Nor’Easters (3-1-0), and the U20s (3-1-0) in the hunt, it was clear that anything could happen come the playoff rounds. By the time the dust settled on Sunday it was the Steel City Bombers and the Ottawa Dirty Birds who would face off in the finals. The game was low scoring, and there was never a clear advantage for either side, but in the end, the Dirty Birds managed to eek out a win with a score of 1-0 against the Bombers.

The Women’s A Final was a little more contentious than the B division. Happy Endings, Ottawa Blackouts and the Atlantic Crush all appeared to be in the running to advance to the final game. With so many close games between these three teams, it was difficult to determine who would find themselves in the championship game. However, the Crush took a loss in the semi-finals, and Happy Endings defeated the Stanley Cupcakes, setting the final game between Happy Endings and the Ottawa Blackouts.

The final game was something of a back and forth, but the Happy Endings were really showing their teeth by the third period when they were up 2-1 against the Blackouts. The game would stay at this score throughout the period. The Blackouts were fighting, but just couldn’t seem to keep the ball out of their end. By the time the final buzzer sounded, the Blackouts were unable to complete the comeback, and the Happy Endings won the Women’s A division final with a score of 2-1.

Footage of the Women’s A final can be found right here.

As usual, the Men’s B division was incredibly competitive; and with last year’s champs, Phoenixville Graffix moving 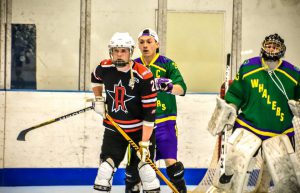 up to A along with perennial threat Buffalo Fusion, the division was really up for grabs. After the round robin, the semi final was set with the (1) Leominster Titans taking on (4) Jersey Fresh and (2) Rhode Island Rage vs. (3) Massachusetts Whalers. Both games were incredibly tightly fought contests that saw Jersey Fresh upset the number one seed Titans 4-3 and the Rage defeat the Whalers 4-2 to advance to the finals.

The final game of the division seemed like it was over before it started. Jersey Fresh absolutely ran away with the game. There was almost nothing that the Rage could do, Jersey Fresh just kept scoring goal after goal, and eventually the deficit made a comeback extremely unlikely. Jersey Fresh won the final in a shutout with a score of 5-0.

Some genuine tension came out of this division. All the teams going into the tournament start out in the same lump 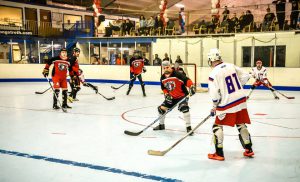 and then, based on record, are moved into A or B division, or given a bye to the quarter finals. Having watched a number of these teams in the past, there weren’t too many outcomes that surprised us. We had a feeling that the Pittsburgh Gods and the Niagara War Pigs were going to make it pretty far. After the round robin, the top five seeds: Gods, War Pigs, 74s, Flyers, and Godfathers wer all sitting with a tidy 4-0-0 record.

The semi-finals came down to the Pittsburgh Gods, the Niagara War Pigs, the Leominster 74s and the Barrie Flyers. The Flyers managed to squeak by in one of the toughest quarter-final games against the Godfathers – a very defensive team. After making it to the semi-finals, the Flyers got what could be considered the toughest semi-final game as well against the Gods, who would take the win moving them on to the final game against the War Pigs. The Pigs won their game against the 74s with a final score of 3-0. This was no simple task, as the 74s have some of the top players out of the states, but the Pigs dominated offensively, and used their size to their advantage. After an early second period goal, it seemed unlikely that the 74s were going to make a comeback and the pigs would advance to the final. The stage was set for the war Pigs and the Gods, a Battle of previous NABHC champs.

It’s always exciting to witness a game where a Canadian team faces off against an American one, and this one was no different. Both teams had put in their work to make it to this spot in the tournament, but after their win against the 74s, the War Pigs were feeling pretty confident. By the third period, the Pigs were up 3-0, and it didn’t seem like the Gods were going to be able to cover that much ground. With just three minutes left in the game though, the Gods managed to make it count. They scored one goal, and then decided to pull their goalie. Unfortunately, this risk allowed the Pigs to score an empty netter, bringing the score to 4-1 with just two minutes left in the game. It’s always reassuring to see a team play the game right up until the end, and the Gods did not want to go down with a three-goal deficit. They scored a lightning fast goal almost immediately after the ball drop, but they weren’t able to cover the ground they needed in the remaining two minutes. The Pigs took it by a final score of 4-2 after a great showing of ball hockey, winning them the title of Champions in the Men’s A division.

This year’s NABHC was full of exciting hockey to watch, and we saw some incredible players on the floor. Congratulations to the Niagara War Pigs, Happy Endings, Jersey Fresh, and Dirty Birds. Additional footage of the weekend can be found on the Cool Hockey Events Facebook Page