Last week shared a tournament preview that went over what to expect out of the Men’s A & B divisions in the upcoming NABHC Tournament in Trevose, PA. Now we turn our attentions to the Women’s divisions at the same tournament. Here’s what we’re expecting out of this weekend’s tournament.

The 2017 tournament saw three teams emerge as the cream of the crop within the division.  In the end, the Atlantic 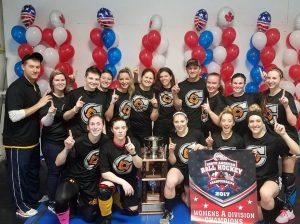 Crush (Mid-Atlantic, USA) would take the crown with a close 2-0 victory over the London Nortstars (London, ON).

We can expect to see a repeat of last year’s final should the Crush and Norstars return.  However, do not count out the Happy Endings.  They lost a close game to the Norstars in the round robin and you can expect them to be in the hunt.  Not to mention, prior to 2017, the Happy Endings were back to back Women’s A Champs.

Keep an eye on the Lady Whalers (Orange Mass); this is a team that dispatched the teams they should beat easily and were unfortunately on the wrong side of some close scores against the more competitive teams.  They are a team on the rise and are currently ranked as the number three Women’s team in the US by Coolhockeyevents.com.

The Women’s B Division was one of the most entertaining to watch in 2017, with almost every game being a 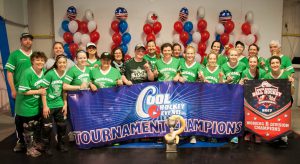 competitive one.  This was most true of the final, which saw the Chicago Lady Cobras defeat in the Ottawa Blackouts 2-1 for their first championship.

It’s tough to pick favourites in this division with so many great teams but, in addition to last year’s finalists, we’ll be keeping careful watch on the Steel City Bombers (Pittsburgh, PA), and the RedFoxes (New Hampshire, CT).

In 2018, we’re keeping an eye out for Amaze Balls (Boston, MA).  Although they finished as the sixth seed in the 2017 tournament, they gave the RedFoxes all they could handle in the round robin.  They are currently ranked number 15 in the US by Coolhockeyevents.com and we think that they are a team on the rise.

For all the latest in the world of ball hockey, stay tuned to stickskillz.com, and don’t forget to follow us on Facebook, Twitter, and Instagram for up to the minute developments. Want to get stories like this and more delivered right to your inbox? Sign up for our monthly newsletter, the Top Cheddar for free.