It’s time once again to spit in the eyes of the Gods, then smile. That’s right, the Ballhockey.com Clash of the Titans Tournament is happening this weekend from Friday November 16th-18th, and if it’s anything like last year’s tournament, it’s going to be quite the event. We saw all sorts of intense ball hockey competition at last year’s games, and with the full team list and schedule out now, we can’t help but run through possible outcomes in our heads. The games are just a few days from kicking off for real, but we thought we’d run down what we’re expecting out of one of the last big ball hockey events of the year!

The tournament will run from November 16th through the 18th at the Ballhockey.com Athletic Centre and the Haig Bowl Arena concurrently in St. Catharines Ontario. With 14 premier teams in attendance, we have a feeling that things are about to get unseasonably heated for November in Ontario.

A ton of familiar teams will be coming out to compete for the first-place spot in this tournament – and not just from Ontario. There are a few teams making the trip from the USA to throw their helmets in the rink. All told, we’ll see:

Of course, we’re excited to see if Midnight Express will be able to defend their title as champions of the 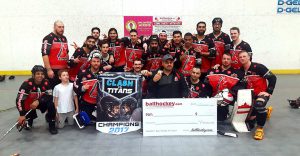 2017 Clash of the Titans tournament, but we’d be lying if we said they didn’t have some stiff competition this year. Ballhockey.com’s own list of the Top 25 Ball Hockey Teams in North America ranks the Pittsburgh Gods just above them, and we’ve seen some stellar play out of the Niagara War Pigs in the past.

With three teams out of Niagara – just a stone’s throw away from St. Catharines – it’ll be interesting to see how they use their presumed familiarity with the rink to their advantage. Let’s not overlook the added element of pressure when American teams enter a Canadian tournament. Anecdotally, there’s a sense of Canadian Pride when it comes to winning a game of hockey, and we’ve witnessed teams kick it into high gear when they’re facing off against a group from the states. That said, it’s always interesting to watch how a team’s play style can differ depending on which side of the border they’re on.

What are We Looking Forward To?

Taking all that into consideration, our most anticipated game of the round robin has to be Midnight Express’ first game on Friday against the Toronto Titans. This game should be a good indication of how Express will perform through the rest of the tournament. We’re also looking forward to watching the Niagara Rebels take on the Niagara War Pigs. Two talented teams hailing from the same city going at it is always an exciting thing to watch. There are going to be a ton of thrilling match-ups this weekend, and you can find the full schedule of the games right HERE.

If you’re a ball hockey fan in the Niagara region then you owe it to yourself to head to St. Catharines this weekend to watch some of the biggest names in the sport go at it. Make sure to stay tuned to stickskillz.com for our recap of the tournament, and don’t forget to follow us on Facebook, Instagram, Twitter, and YouTube