Today is the final installment of our summary of last weekend’s April Fools OBHA Winter Provincial Tournament hosted by Ball Hockey International (BHi) and the Ontario Ball Hockey Association (OBHA).  Over the past couple days we took a look at the action in the Barn Division, and Rec Divisions; and today we will wrap things up with the Intermediate Division. 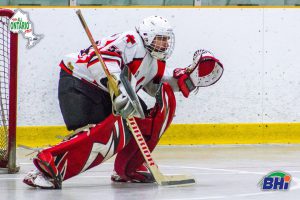 The Intermediate division semi-final got underway Sunday morning, and featured the Outpatients taking on the Throwbacks with the winner set to meet the Reapers in the final.  The first period was all Outpatients as they outchanced the Throwbacks early however, it was the Throwbacks that were first on the scoreboard.  The Throwbacks would carry that lead into the second. 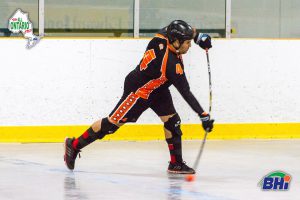 The Outpatients would open the scoring in the third to build a 3-1 lead less than two minutes into the period.  In a bid to pull themselves back into the game, the Throwbacks would pull their goalie for the extra attacker while on the power play.  The aggressive strategy didn’t pay off as the Outpatients added a fourth goal with 3:40 remaining in the game.  The Throwbacks refused to let up and again they pull the goalie while on the powerplay.  This time, they get the result they want on goal by Travis Parkin.  Just over a minute later, Parkin would strike again with the extra attacker and pull the Throwbacks within 1.  The Outpatients looked to give themselves some insurance with another empty net goal with less than 2 minutes left but, the Throwbacks would keep pushing, eventually tying the game 5-5 with 2 seconds left on the clock, sending it to overtime.

Nothing would be settled in the extra frame, which would take this incredible game to a shootout.  After the first three shooters missed, the Outpatients, Rob Vanwynsberg would score the eventual winner as the final Throwbacks shooter would fail to get one past netminder, Ryan Ollson.  With the win, the Outpatients advance to the final to take on the Reapers. 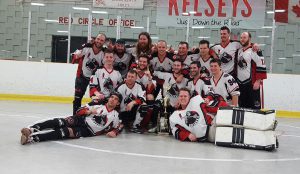 In the final, a well rested Reapers team would strike first, less than 30 seconds into the period to take a 1-0 lead.  They would find the back of the net less than 5 minutes later on a goal from Kyle Campbell off a great feed from Matt Dale.  The Repears were in complete control of the first, taking a 2-0 lead into the second.

In the second, the Reapers would find themselves in some penalty trouble throughout the period allowing the Outpatients to find their stride, scoring their first goal of the game on the power play.  The Reapers remained on top 2-1 heading into the third.

In the final period, the Reapers took control, scoring three unanswered goals enroute to a 5-1 win and the Intermediate division crown.  The Reapers were led by Kyle Campbell (2G) and a strong performance from netminder, Gage Gonyou.

What a great weekend of ball hockey.  We saw some great talent on display in all three divisions.  Not to take anything away from this weekend’s winners but sometimes, when you have to fight through OT just to get to the final, it’s tough to get over that mental and physical hump once you get there; and that may have been the case in both the intermediate and rec finals.  Once again, congrats to the Outlaws, who beat the Piranhas 8-4 to take home the Barn division championship.  Next, the Hamilton Lightning gave the Gulls all they could handle enroute to a 5-1 win to clinch the Rec division championship.  Finally, the Reapers used a strong third period to pull away from the Outpatients to take the Intermediate division with a 5-1 win.

Big thank you to Stronach Arena, and especially BHi London for putting on a great show.  See you all at the next event; be sure to follow us on twitter and facebook for all the latest news on ball hockey.