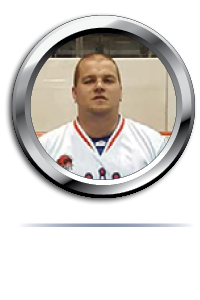 We talked to Travis Parkin about what it’s like to play with Team Grea Britain for the first time.

SS: How is it that you came to be associated with the Great Britain Heritage Team

TP: I saw a couple postings online, and I talked to Chad [Asselstine]. I’ve played with Chad for the past five years, and I decided to talk to him about the tryouts, and I made it.

TP: I played ice hockey growing up, and loved hockey in general. Ball hockey is just a little more exercise, and a little bit more fast paced I find. It works your skills more than your typical ice hockey league.

SS: In the game against USA you guys were down two goals and managed to pull it back in the second period…you must have been feeling pretty good after that.

TP: I felt that, as a team, we really pulled together after we were down two. We were kind of meshing as a team – which has been happening since we got here, I mean, we’ve become a family. I felt that we really showed all the other teams here, and we were for real.

SS: Do you have any experience playing with any of these guys outside of this tournament?

TP: Yeah, there’s a few guys I’ve played in London with, and anyone else I either know of or have played against. So it was fun getting on the same team with them.

SS: So this is kind of the first time that everyone here is playing on the same team together, so do you feel like everyone is meshing together well?

SS: We’ve been in the Czech Republic for a few nights now, and we’ve been to Prague…what do you think your favourite part of the experience has been so far?

TP: Doing everything as a team. Between the breakfasts, the lunches, the trips…even something as simple as going to the store, or going to the square, or having a few drinks at the hotel. I think this is a beautiful place to be but I really like the team aspect of this trip.

SS: You guys are going into the semi-finals undefeated, so where’s your head at for the upcoming games?

TP: There’s a little bit of nerves set in there, but I’ve been in the finals with my junior ice hockey team, so right now I’m trying to stay focused. I have a tattoo on my right arm of my grandma and my daughter, so I kiss the arm before I go out, and that seems to get me through…So I think it’s going to be fun playing the next game.

SS: Is there anything else you want to say before we wrap this up?

TP: I’m having a blast here. Like I said, all the guys here are becoming a family, and it’s quite an experience.

We’d like to thank Travis for taking the time to sit down and answer some questions for us. We wish him and the rest of the BHi Great Britain Heritage Team the best of luck at the tournament. Live coverage of the games can be found right here and the games’ schedules can be found here.