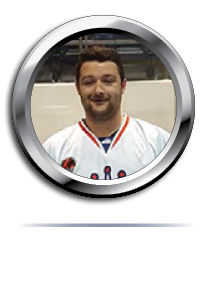 I caught up with Defenseman Mitch Scott to talk about playing with the team for the first time, and what he did to prepare for his first international tournament.

SS: How did you come to be affiliated with the BHi Great Britain Heritage Team?

SS: So do you know any of the other guys at this tournament? Have you played with any of them before?

MS: This is my first time playing with any of these guys, other than at try-outs. I didn’t really know anybody on the team at all coming into this. I might be the only one here who doesn’t know anyone at all.

SS: Since you’re new to the group, from your perspective, how do you think the team is coming together?

MS: I’m actually very surprised. It’s an unbelievable group of guys. One of the best group of guys I’ve been around in a long time. I’ve been on a lot of hockey teams, so I think that everyone’s gelled together right away, and we’ve all become friends which I think will be a big advantage for us. Especially after some stories I’ve heard about other teams in the tournament.

SS: Is the WBHF your first international tournament?

MS: Yeah, this is my first. So I’m nervous, excited…I just really want to get going and see how it goes.

SS: You’ve been in the Czech Republic for a couple days now, what do you think your favourite part of the experience has been so far?

MS: Probably the culture of it. Where we are right now, where our hotel is, I didn’t think much of it at first…especially during the drive in. As soon as we went into the city centre of Litomerice on Friday though, It was like “wow this place is unbelievable!” It is a different culture, so I don’t know whether or not they like adapting to us being in their territory, but we like adapting to their culture, so it’s been nice.

SS: We might bring a little rowdiness to the town.

MS: [laughs] We’re bringing money to their economy too! We just dropped thousands of koruna in the last couple days!

SS: What draws you personally to ball hockey vs. ice hockey?

MS: I grew up playing really high level hockey my entire life. I played junior, I had a scholarship for ice hockey. When you play ice hockey every day, and then go to something different like ball hockey, which I never played growing up, I instantly fell in love with it, because it was something different, It was something new that I looked forward to all the time. As much as I enjoy working out, ball hockey was a great way for me to get cardio in, and then I became more competitive in it. I wanted to win and be the best, and score in the leagues that I play in. I just absolutely love it. I can’t get enough ball hockey.

SS: Is there anything that you’ve done differently to prepare for the WBHF?

MS: Yeah, I dropped 40 pounds. I quit a job back in October that I had put on a little bit of weight at. We had some good times at that job, but I was always eating garbage. When I left that job I knew I needed a change, and as soon as I found out that I made the team, I started to train hard, and since February I’ve lost 40 pounds, which is real nice.

SS: Who do you think the biggest competitor at the tournament is going to be?

MS: It’s a really hard question to answer, because I just think there’s going to be so much parity in the tournament. I don’t know how Hungary is going to be, but I know Europe will be a real strong team with Slovaks and Czechs on the team. I know that Slovakia and the Czech Republic will be very good, and obviously Canada and USA are just power houses all the time so I think this will be a real tough test, but we have an unbelievable team, I’m very impressed with our team.

We’d like to thank Mitch for taking the time to sit down and answer some questions for us. We wish him and the rest of the BHi Great Britain Heritage Team the best of luck at the tournament. Live coverage of the games can be found right here and the games’ schedules can be found here.