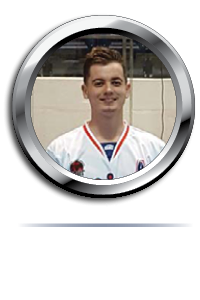 Mckenzee MacQueen: I’ve been playing ball hockey for about five to six years. I started at BHi London when it first opened and that’s how it first started. I knew Dan [Gilbert] through a friend and it all kind of went from there.

SS: How did you come to be affiliated with the BHi Great Britain Heritage Team?

MM: I guess it all started about five or so years ago, where I’ve built a relationship with Chad [Asselstine], the coach, as well as Dan [Gilbert], the general manager, and I was picked for the team.

MM: No, last year I came to the Czech Republic in Prague for Team Canada in the Under 20 Junior World Championship. We went undefeated and we won gold.

SS: So you’ve been in the Czech Republic before, what’s your favourite thing about the country?

MM: The buildings are amazing. Just everything when you go to downtown Prague is just beautiful…and it’s different. Not anything that you would see back home.

MM: One hundred per cent. When I found out I was coming, I knew it was a men’s tournament, and I have a bit of a smaller build, so I made steps to try and get stronger in all aspects. Basically, I’ve tried to add as much strength as I can to my regular game.

SS: What draws you to ball hockey vs. something like ice hockey?

MM: It’s more practical. It’s more fun…I mean, it’s more fun for me. I stopped playing ice hockey going into grade nine or ten I believe. With work alongside everything else, there’s just no time for ice hockey. I happened to pick up ball hockey and grew to like it more.

SS: Who do you feel is going to be the biggest competitor at the tournament?

MM: Coming into it I thought it would be Slovakia. I still think Slovakia is going to have a good team, I mean they always do at these tournaments. But watching the Czech team practice, they’ve been out I believe three times since we’ve been here, and we can see where they practice from the hotel room, and they look like they came prepared and did it right, so I think they could be a huge contender.

SS: You guys are still going to take the gold though?

We’d like to thank Mckenzee for taking the time to sit down and answer some questions for us. We wish him and the rest of the BHi Great Britain Heritage Team the best of luck at the tournament. Live coverage of the games can be found right here.  and the games’ schedules can be found here.