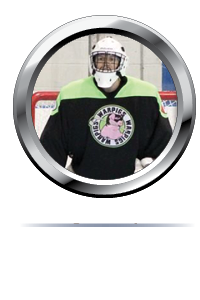 This is the first Player Profile for goalie on Team Great Britain. I sat down with London Ontario’s own, Gage Gonyou.

Gage Gonyou: For about five years.

SS: How did you come to be associated with the BHi Great Britain Heritage Team?

GG: I just got talking with Chad [Asselstine], and I said that I was available if he needed me, and that’s basically how it happened.

SS: Is this your first overseas tournament?

GG: This is my first tournament to ever play in another country. I’ve been at a few ice hockey tournaments where I’ve had to get on a plane, but this is a first out of country experience for me.

SS: What is it that draws you to ball hockey vs. something like ice hockey if you have a background in that sport?

GG: I played ice hockey my whole life, but with ball hockey it’s just the camaraderie and the friendships amongst the guys, and the quality of the tournaments is way better than ice hockey. There are way more tournaments and a way bigger opportunity to play in a tournament like [the WBHF].

GG: The architecture is my favourite. It’s absolutely gorgeous here. All the small towns are absolutely stunning. Like Prague for example. The culture that’s here is unreal. It’s nothing like home.

SS: You guys are about to go on for your first game of the tournament in about twenty minutes or so, so how are you feeling before the game?

SS: Who do you think is going to be the biggest competitor at the tournament?

We’d like to thank Gage for taking the time to sit down and answer some questions for us. We wish him and the rest of the BHi Great Britain Heritage Team the best of luck at the tournament. Live coverage of the games can be found right here and the games’ schedules can be found here.