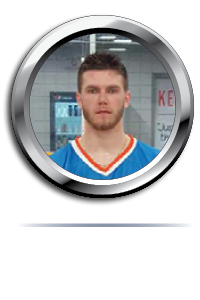 I sat down with Drew Clemas, brother of number 12, Gordy Clemas, to discuss being at his first international tournament, and how the team is coming together as a unit.

Drew Clemas: I started about four years ago now. I started in tier three and didn’t really have a team, and I made some buddies throughout the league, and now we’re in tier one.

SS: How did you come to be associated with the BHi Great Britain Heritage team?

DC: I was invited to the tryout, and I was in a little bit of a money struggle, so I decided to turn down the option. A few months later, I was asked to come out again, and I decided that it was definitely worth it, and I thought that I could make it happen, so I did.

DC: I played ice hockey my whole life, and I’ve played lacrosse as well, so I like to run. I had to actually quit both of those sports due to concussions, so being no contact, ball hockey felt like the perfect sport.

SS: Well, we’ve been in the Czech Republic for a few days now, what’s been your favourite part so far?

DC: Team bonding, and spending time with the boys both on and off the floor. And of course winning the games.

SS: You guys are undefeated right now going into the semi-finals, so talk about that for a moment.

DC: Oh, it feels great, I got the start tonight, and it was a definite boost in confidence, and got us on the board as a line, and we came out on top.

SS: So this is really the first time this team has really played together as a unit…how do you think the team is gelling together so far?

DC: Definitely better than expected. There were a few weaker opponents to start, but that was a good warm-up, and we took it to ‘em against the tough teams.

SS: Is there anything that you’ve done differently to prepare for the WBHF?

DC: I try to go to the gym a few times weekly, but I’ve definitely upped my cardio and have tried to eat healthier.

SS: You guys are moving into the semi-finals undefeated, so where’s your head at for the upcoming games?

DC: We just need to play how we’ve been playing, and keep our head in the game. No retaliation penalties, and we need to put the points up.

SS: Is there anything else you want to add before we wrap it up?

DC: No, just thanks for having me.

We’d like to thank Travis for taking the time to sit down and answer some questions for us. We wish him and the rest of the BHi Great Britain Heritage Team the best of luck at the tournament. Live coverage of the games can be found right here and the games’ schedules can be found here.