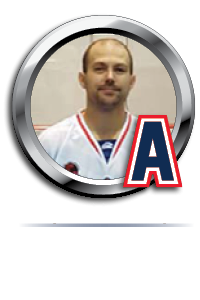 I sat down with number 15, and one of the Assistant Captains of Team Great Britain, Bryan McGahey to discuss how he came to start playing ball hockey, and what it is he loves about the rink at the WBHF.

Bryan McGahey: I’ve been playing street hockey since I was a little guy, which [laughs] has been my whole life. I grew up with a stick in my hand, shooting at the garage door, getting in trouble for leaving wet tennis ball marks on a white garage door. A bunch of my buddies and I would throw a couple nets on the roofs of our cars, and we’d drive to the tennis cars, and we’d play ball hockey – every Sunday of the summer. At the time, we didn’t know that organized ball hockey existed, but when we found that out, we finally put our first team in and played out of Toronto in the York Central Ball Hockey League. We didn’t win a game our first season – I think we probably scored a half a dozen goals. That was when we were in our early twenties, so I’ve probably been playing organized ball hockey for about twelve years, and I originally got into it because it was something I wanted to do with my buddies.

BM: I play both, but I find that it’s a completely different game. I have two different groups of friends that play each game. That’s the main reason that I play…obviously it’s fun to play ball hockey, but for me it’s about hanging out with the guys.

SS: How is it that you became associated with the Great Britain Heritage Team?

SS: You mentioned playing together and against a lot of the guys on the team, but this is really the first time that all of you are playing together as a unit. How do you feel the team has been gelling so far?

BM: I think it’s been extremely positive right out of the gate. A lot of the guys are really getting along. You see some other teams where players are pulled from all over the country, and they don’t really know each other until they see each other at the airport, or at practice. Chad and Dan had organized some functions before we left which was beneficial for guys that didn’t know each other. It gave them the opportunity to see who they are, interact with one another. But there was some pre-existing familiarity and a lot of bonds going into the tournament which is good. For the most part, everybody here is close now. We’ve got this motto going where we say that we’re a family. If you’ve watched any of our games, you can see that everyone gives it their all, and everyone wants to win for their team.

SS: We’ve been in the Czech Republic for a few days now, what has been your favourite part of this experience.

BM: Prague is absolutely beautiful…I’d have to say Prague. Outside of the rink. The rink is pretty cool. What they do around the games is unheard of. They’ve got food options, they’ve got live music, they’ve got beer tents. They really know their demographic.

SS: Where was your head at going into this tournament? What did you think the competition was going to be like?

BM: I knew it was going to be good. I knew that Canada and the US would be good. I’ve played a bunch of those guys in the past. I wasn’t sure what to make of Team Europe. I knew that the Czech Republic and Slovakia would be competitive. I came into the tournament knowing that we’d be in for some tough games, and as you’ve seen, we’ve battled hard in those games.

SS: Talking about a hard game, a huge accomplishment for you guys was coming back from a 2-0 disadvantage against Team USA. That must have felt pretty good, can you speak on that for a moment?

BM: Honestly, I was really happy for Jegger [Andrew Jegg]. He’s a hell of a hockey player, and to be put in that situation, with the game on your stick, and to deliver in that moment, really is going to solidify our seat as first place in our bracket. It was just tremendous. I’m just so happy for him.

SS: So where’s your head at now, going into the next few games?

BM: Gold medal. One game at a time. I think we won it now. I don’t know sure we were when we got here that we’d be competing in that gold medal game when we arrived in the Czech Republic, but now that we’ve played these games, and watched some other games, it’s gold or bust now. I don’t know that that was the thought coming in, but now it’s gold or bust. If we don’t play in that gold medal game, then I think we’ll all feel like we let an opportunity pass us.

We’d like to thank Bryan for taking the time to sit down and answer some questions for us. We wish him and the rest of the BHi Great Britain Heritage Team the best of luck at the tournament. Live coverage of the games can be found right here and the games’ schedules can be found here.