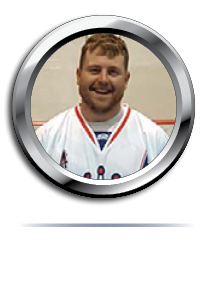 This time I caught up with Team Great Britain Forward, number 88, Brian McNellan.

Stick Skillz: How did you come to be affiliated with the BHi Great Britain Heritage Team?

Brian Mcnellan: I just went down to a tournament in London [Ontario], and Chad [Asselstine] came up to me and asked me if I’d like to come down with the team and give it a try – go to the training camp and stuff like that – and it was good, so now I’m here.

SS: Do you have any experience playing with any of the members of the team previously, or is this your first time?

BM: I’ve played with a lot of these guys over the years. Not usually on their team, usually against them, but we’ve been playing against each other for, like, ten years.

BM: Yeah, this is the first one.

SS: You’ve been in the Czech Republic for a couple days now, how are you liking it so far?

BM: It’s good, it’s fun. It’s nice to see another country…Unless you’re playing ball hockey, it’s probably somewhere that you’re never going to get to go again, right? It’s the only time you would come here, so it’s kind of a once in a lifetime opportunity.

SS: What draws you personally to ball hockey rather than something like ice hockey?

BM: Well, right now, for our age, ball hockey is more competitive. Ice hockey is more for going out and having fun with your friends. I like keeping the competitiveness, because I’m getting older too now, so I like playing it because of that. It keeps me in shape, and I love it.

SS: Leading up to the WBHF, is there anything that you’ve done differently in your training regimen to prepare for the tournament?

BM: No, just a lot of running, trying to keep my cardio up. These teams are going to be good, and running’s a big part of it, so you don’t want to get fatigued out there. I usually try to stay in pretty good shape, so I’ve just tried to keep that up.

SS: What do you think your chances are looking like for the tournament?

SS: Who would you say the biggest competitor is going to be?

BM: Well, Canada…they look good, U.S.A. looks good too. Those are probably the top two teams. I don’t know too much about the other teams, so I’m not too sure. Basically you don’t pin them down to one team, you play everyone the same. As long as you play your own game, that’s how you should play every team.

We’d like to thank Brian for taking the time to sit down and answer some questions for us. We wish him and the rest of the BHi Great Britain Heritage Team the best of luck at the tournament. Live coverage of the games can be found right here and the games’ schedules can be found here.