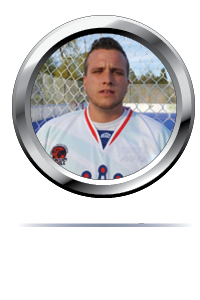 We talked to Andrew Wagner, one of Team Great Britain’s centres, about his first experience traveling outside Ontario.

Andrew Wagner: I’ve been playing for about five years now.

SS: How did you come to be affiliated with Team Great Britain?

AW: I actually missed the try-outs. I really regretted not making it to them. Then they ended up needing another guy, and I got the phone call from Chad [Asselstine], and I hopped right on the opportunity as it’s a once in a lifetime experience. So far it’s been absolutely unreal. I’m just really happy to be here.

AW: This is my very first. This is the biggest stage I’ve played on so far.

AW: Yeah, I’ve never actually travelled in my life, so this is my first time leaving Ontario on top of all of this. To be able to come all the way here, and play a sport that I love is just amazing.

SS: What’s been your favourite thing about the Czech Republic so far?

AW: The atmosphere is so different from what we’re used to back home. I love everything, really. It’s my first time travelling, so everything is just so new to me. Seeing how this tournament has been put together and just how big ball hockey is over here in the Czech Republic – it just makes you feel very proud to be a part of this.

SS: Do you have any ice hockey experience?

AW: I do, I played fifteen years growing up. I never actually played ball hockey until I moved to London. I’ve played ice hockey since I was five, but once I got a bit older, the competitiveness was kind of gone, and I moved to London and got into ball hockey. I didn’t realize how big it was until I joined it, which is the best thing I ever did.

SS: So it’s the variation in the tournaments and the competitiveness that draws you to ball hockey now?

AW: Definitely. For our age group, you can relive what you did as a kid, like going out to the tournaments with the boys. I would never be where I am right now playing ice hockey. Being at an international tournament like this would almost be an impossibility. Like I said, I didn’t realize how big this sport was, but the fact that there’s world championships, and you can go to represent a country and represent your family is amazing.

SS: At the time of this recording, it’s the second day of the tournament. Yesterday you guys saw a big win against Team Europe, you guys took it with 6-0. There was a huge amount of support from you on the floor, and you guys played great yesterday, so you must be feeling pretty good after that win.

AW: Oh, huge. Even just getting to that arena yesterday, and the first time setting foot on that floor with the boys, and the way we came together yesterday – our first game playing together –  was absolutely amazing to be a part of. To be able to contribute in any way I could to help the team get that ‘W’ felt amazing. I’m very, very proud of what we’ve all accomplished here so far, and we’re not done yet.

SS: What is your strategy going forward for the next games?

AW: Just play our structure, keep to our game, and no bad habits. We played our structure right to a tee yesterday. There can be a few improvements here and there – like anything, you can always get better, but going forward is just keeping that structure and winning those battles. The more we have possession, the better chance we have to win. Defensively we’re so strong, and we have so many strong offensive players that we’re going to be a tough team to beat I think.

SS: Who do you think the biggest competitor at the tournament is going to be?

AW: I think USA and Canada are both going to be a good battle. USA won last year at World’s, and watching Canada yesterday, they look like a very strong fast team as well. We play the States game three, which is going to be a big test to see where we stand with the top teams. I feel like we’re up there with team USA and Canada. I’ll be honest with you, I’m very confident that if we keep to our game plan and play the way we have been that we can win this.

SS: Was there anything you did to prepare leading up to the tournament?

AW: Oh yeah. A lot of running, conditioning, and I play a lot of ball hockey at home – I play about six games a week. Also eating right; you’ve got to have fuel to burn. Just trying to take it all in at the same time. I found out that I was coming here about a month before the tournament, so it was a bit of a scramble to get the money together and everything, but it’s been just an unreal experience, and I’m happy to be here. It’s so surreal to be here, and everyone is just over the moon to be here, and I couldn’t be happier to be a part of this team.

SS: Is there anything else you want to say before we wrap this up?

AW: I just want to thank my family for the love and support they’ve shown me during this experience. Obviously this is new for me, being my first time out of Ontario, but my family has been incredibly supportive and proud throughout the whole tournament and the lead up to it. I’m very lucky to have them in my life.

We’d like to thank Andew for taking the time to sit down and answer some questions for us. We wish him and the rest of the BHi Great Britain Heritage Team the best of luck at the tournament. Live coverage of the games can be found right here and the games’ schedules can be found here.