The OUA Ball Hockey league is a varsity university league featuring four teams from Ontario. Guelph, Brock, Carleton and Wilfred Laurier have participated in the league since its creation in 2014. The league is gaining popularity and the level of players continue to develop with each passing year. The first championship crown was handed out to Brock after they won the Ontario Inter-University Ball Hockey Championship. Brock has been a dominate force in the league and continued to steam roll teams in the 2015-2016 season. The 2015-2016 was the first full year of ball hockey and was a great step towards the growth and the development of ball hockey at the university level.

In the league semi-finals the Brock Badgers faced off against the Waterloo Warriors and the Carleton Ravens battled the Guelph Gryphons. The Badgers, coming off a 13-3 season, were able to carry their momentum into the playoffs and swept the Warriors 2-0 in the series. Carleton also rode Regular Season success into the Semis. The Ravens prevailed in a 2-0 series sweep sending the Gryphons packing and setting up an exciting Final against the Badgers.

Both strong teams lined up for an intense game 1 of the Series. The offence was present for the Ravens and the Badgers with the game ending 7-5. The Badgers were able to come from behind and defeat the Ravens to take a 1-0 Series lead. The Badgers could not be stopped in game 2. The Ravens were peppered and could not handle the high powered Badgers unit. The Brock Badgers took game 2 by a score of 6-1 and were crowned the 2015-2016 OUA Ball Hockey Champions! 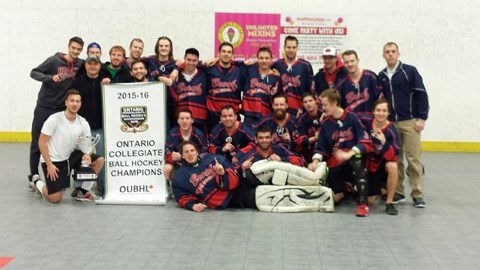