This weekend is shaping up to be a big one for ball hockey fans. Between the brand new Got Game tournament 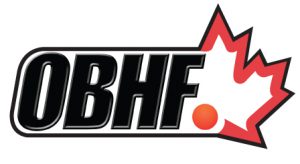 taking place in London, ON. and the upcoming Ontario Ball Hockey Federation (OBHF) Provincials happening in Barrie, it’s a regular hot bed of exciting, fast-paced, high-level ball hockey action. Some familiar teams – and a whole lot of new ones – will be in attendance during the Provincials this weekend, and we’ve got a preview to fill you in on exactly what you can expect out of the event. Let’s get started.

The OBHF will host its Provincials this weekend (May 25-27th) for Men’s A, B, C & D teams. The round robin will be held at the Holly Community Centre in Barrie, Ontario, and the final games will move to the East Bayfield Community Centre. The games promise to be heated this weekend so, if you’re in the area, make sure to stop by the rinks to catch some of the action.

The D Division has a huge number of teams coming out to compete. Altogether, the teams in attendance will be: The Wildcats, Hardshaft, T.C. United, The Snipers, The Tri City Knights, Muck N Barns, The Hall of Flames, The Moose, The Bullets, The Stallions, The Toronto Goodfellas, The Flyers, The Toronto Canucks, The River Oak Raiders, The Autobots, and the Kitchener Rebels. While it’s always interesting to see teams from the same region battle it out against one another – like the Toronto Canucks and Goodfellas in this case – the teams have been divided into four divisions for the round-robin, so there’s no guarantee that we’ll see a matchup like that. Instead, with a division filled with this many teams our interest will derive from simply who will make a name for themselves early on, and will they manage to carry their success to the end.

After the round robin the games will move into quarter finals where the Division 1 4th place team and the Division 2 3rd place team will face off against the 1st and 2nd wild-cards respectively, to determine who will move on to the semi-finals. With this many teams, and this many unknown quantities, this will definitely be an interesting division to watch out for.

The C Division certainly has the largest number of teams competing this weekend – and a good number of them from Toronto at that. Over the weekend, we’ll see: The Knights, The Vipers, The Toronto Rams, The Toronto Spargulls, The Toronto Kings, The Chanti Warriors, The Phantoms, The Toronto Stealth, The Sleazy, New Tecumseth Xtreme, The Brampton Predators, The Bayview Blackhawks, The Monsters, The Durham Dirty Shwas, Wolftown, The Saints, The Toronto Stallions, and The Dragon Knights.

Even though the teams have been separated much the same way D Division was, most of the groups will see a matchup between two or more teams from the same region. We’re curious to see how the playstyles will differ in these games, and to see who comes out on top. Again, with this many teams in play, anything can happen.

This is where the action is really going to kick off. As we move higher up the ladder, the number of teams starts to taper off, but the games will start to become more intense. The Thrashers, Grimsby Grizzlies, Garage Guys, and The Big Barstone will all be battling it out for a top spot, and we’re excited to see who’s going to take it. A trend we’ve noticed lately are teams crossing divisions after tournaments like this one, so it stands to reason that teams at a B level could be looking to move up to A Division. With that in mind, we think that some of the highest-energy games might come out of one of the B teams.

We won’t lie to you, this is probably the division that we’re most excited about. Particularly because from the outset 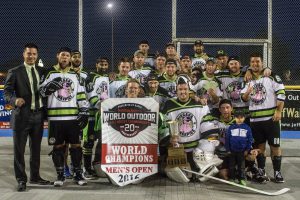 The Vaughan Red Wings were certainly a surprise victor during the Tier 1 games, so it’ll be exciting to see whether or not they can hold onto their first-place title. That said, the Niagara War Pigs held pretty close to the top throughout the entire season, and just recently took first place in the Men’s A Division during the North American Ball Hockey Championships (NABHC), and with a number of the Pigs’ players competing on Team Great Britain during this year’s World Ball Hockey Federation (WBHF) Championships, we think they’ll take this as an opportunity to show everyone what they’re made of. Regardless of the outcome, we couldn’t be more confident that this Division will be exciting to watch play out.

There’ll be no shortage of exciting ball hockey taking place this weekend, and if you want to follow along with the scores and standings of the OBHF Provincials, results will be posted right HERE.