Last weekend the Ontario Ball Hockey Association (OBHA) action continued, with the Women’s A, B, C, & Master’s Pre-Season Showcase Tournament. This pre-season event truly set the tone for the Women’s Summer Season to follow, as the air in the tournament was thick with competition. We’re going to run down exactly what took place over the weekend, so you don’t miss a moment of the action in our Tournament wrap up right here.

There were some heated matches during the Master’s division, and quite a few more shutouts than you might expect. In attendance were the: Alliston Bullets, Bradford Madskills, Toronto Phoenix, and the Cambridge Cougars. We could tell right off the bat that the Toronto Phoenix weren’t here to mess around, winning each of their round robin games, two of which with shutouts! The Phoenix were absolutely on point over the weekend, but we knew that if any team were going to give them a run for their money, it would be the Alliston Bullets. They were heading into the 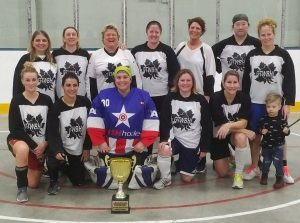 semi-finals with a (2-1-0) record, and with their only loss being against the Phoneix, we knew they’d be out for blood.

Both semi-final games ended in shutouts. The Phoenix beat out the Madskillz with a final score of 5-0, and the Bullets took down the Cougars with a score of 5-0. The Bullets were definitely looking for some form of redemption in the final game against the Phoenix, but just couldn’t make it happen. The Phoenix played aggressively and won the game with (you guessed it) one final shutout at 3-0.

These games were fast-paced and energetic, and we’re excited to see what the teams bring to the floor during the Summer Season this year. The full standings can be viewed right here.

Teams in the B and C divisions were lumped together at the beginning of the tournament, and then separated based on where they fell during the round robin. There were some impressive showings out of these divisions, particularly 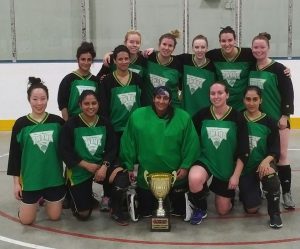 out of Team Canada’s U20 team, who won each of their four games (three of which with shutouts) and moved on to the semi-finals with an impressive eight points.

Once the round-robin was finished, the Stouffville Selects were awarded a bye to the final game for being the top seeded team in C division. From there, the semi-finals came down to the Barrie Better Halves and the Toronto East. The East, having yet to win a game up to this point, conceded the loss to the Better Halves, who won with a final score of 3-0.

The final game in the C division seemed like it could go either way for a while there. This was a relatively low-scoring game, and each team was really on their feet making sure that no one ran away with it at any given time. However, the Selects showed why they were given a bye in the first place and managed to win the game with a final score of 2-1.

The B division semi-finals came down to the U20 Team Canada vs. the Durham Warriors, and the London Ball 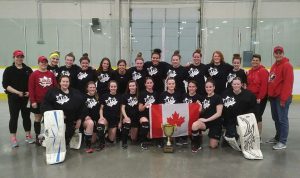 Hoggz vs the Barrie 136. Team Canada was able to continue the trend they’d carved out during the round robin and won handily against the warriors with a final score of 5-2. The second semi-final game was not so one-sided, and the Ball Hoggz managed to eke out a win, but just barely, with a final score of 3-2.

At this point, we were expecting Team Canada to run away with the final game. To our surprise (and delight) that wasn’t the case, as both teams were fighting tooth and nail during the final game. There was quite a bit of parity on the floor, in fact, the game had to move into overtime before anyone could be crowned the victor. That said, when it came down to it, Team Canada managed to tip the scales in their favour and win the game with a final score of 2-1.

Team Canada really put on a show throughout this tournament and kept us excited the entire time. It really looked like they couldn’t be stopped out there despite a close final game. We’re excited to see more out of them as well as the Ball Hoggz, who will no doubt be returning with something to prove during the full Summer season.

Final standings for the B & C divisions can be found right here.

The A division of the pre-season tournament saw many National Collegiate Athletic Association (NCAA), Canadian Interuniversity Sport (CIS), Canadian Women’s Hockey League (CWHL), and National Women’s Hockey League (NWHL) players competing at a top level over the weekend. The result was some intense action, and truly exciting games of hockey. In attendance were the: Durham Stars, Midland Battalion, London Redliners, and the Greater Toronto Holy Canoli. We weren’t sure who to watch out for, but the Battalion were early front-runners, leaving the round robin with a 2-0-1 record. They looked pretty confident heading into the semi-finals. The Redliners and Stars were also teams to watch out for, as they left the round-robin with the same record of 1-1-1, tying each other in their second game.

During the semi-finals, the Battalion faced off against Holy Canoli. We were prepared to watch the Battalion take this win, but we thought there would be a larger deficit between the two teams. The Holy Canoli – who had left the round robin in fourth place – surprised us, trailing by only one goal behind the Battalion. Eventually, they conceded the loss, but they put up a hell of a fight. Conversely, the Redliners ran away with their game against the Stars, 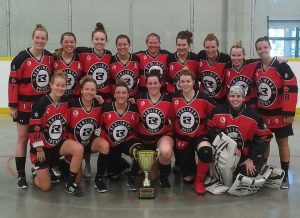 despite coming out of the round robin with the same record. The Redliners won the game with a final score of 3-0, making them look like some stiff competition for the Battalion.

The Final game in A division was a real toss up. The Midland Battalion were the favourites coming out of the round-robin, but after the Redliners’ semi-final game, we knew the championship wasn’t going to go easily to either team. Though both teams were fighting to take home that first place title, the Battalion simply couldn’t close the gap between themselves and the Redliners. By the time the final buzzer sounded, the Redliners had two goals up on the Battalion with a final score of 3-1. It was an impressive feat on the Redliners’ part to take out both the Stars and the Battalion, and they earned their spots as A division champions of the tournament. It’s going to be really exciting to see what kind of energy they’re going to bring to the summer season. If this tournament is any indication, it’s going to be a big one.

Final Standings for the A division can be found right here.

Congratulations to the Toronto Phoenix, Toronto Selects, U20 Team Canada, and the London Redliners. These teams played their hearts out for this pre-season showcase, and we couldn’t be more excited for what’s to come out of the full summer season.