There’s not a lot that could have prepared us for what was going to happen at game two of the Premier Division Semi Final Series, which took place this past Sunday, between the Niagara Rebels and the Brampton Express. There’s no doubt about it, it was an intense game. The action was heavy right out of the gate, and the Rebels’ goalie was on fire. Right away, it seemed like he wasn’t going to let anything through. The Express were aggressive though, and kept firing shot after shot trying anything they could. The aggression rose, perhaps a bit too much over the course of the match, which took an unconventional turn, but we’ll speak to that more a little later on. For now, let’s get into the meat of the game.

As mentioned above, we were immediately impressed by the saves made by the Rebels’ Goalie. There were no shortage of shots being thrown at him, and he managed to save damn near all of them. Even when the Rebels faced a penalty within the first three minutes of the game, he was on his toes, and managed to stop a number of shots.

One thing that couldn’t be ignored was the level of energy on display in this game. Both teams seemed to be exploding from one side of the rink to the other as they were chasing the ball. It’s always exciting to see hustle like this, and both teams were really going for it…maybe a little too much. In the 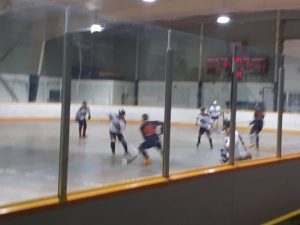 early portion of the games, there was some obvious rough play. Nothing wholly out of the ordinary, but players were definitely getting smashed into the boards. This can be chalked up to some heat-of-the-moment competitiveness, though, as nothing major came of it.

Before too long the Rebels had scored. Then they scored again. A third goal – initially thought to have been saved by the Express – was quickly tapped in by the Rebels, and soon, they were up 4-0 thanks to a beautiful goal scored by number 71 with a huge assist from number 27. It seemed like the Express just couldn’t keep up with their opposition. The ball was back and forth across the red line, but when it counted, the Rebels were there to make the shots. Finally, near the end of the period, the Brampton Express managed to score their first goal, which seemed to turn everything around.

In the second period of the game, the roles seemed to completely reverse. Right off the bat, player 27 on the Rebels conceded a penalty for taking down a player on the Express. While he was out, the Rebels’ goalie let in a power play goal. Shortly after, he was just a second too late dropping his knees to stop a shot through the five-hole, and the Express managed to score again. To tie it all up, number 11 on the Express scored their third goal of the period, with an assist from number 21. This was a major comeback, and it looked like both teams were playing completely different games. The Rebels’ goalie – who had been so impressive in the first period – was now letting in all kinds of shots, whereas the Express’ goalie seemed much more focused after the period change. Just moments after he managed to tie it up, number 11 scored a goal on a breakaway, bringing the score to 5-4 for Brampton.

It was at this point that you could tell, players on either team were feeling the heat. The aggression from earlier was cranking up significantly, and the rough play was becoming actual animosity. The players were all over each other, and as the Rebels began to play harder, there was some noticeable pushback from the Express.

Nearing the end of the period, the Rebels managed to bring the game back to a tie. With the game, yet again, at an even score, you could almost taste the tension between the teams. Spectators were now engaging in the aggression, and were starting to shout expletives from the stands. This is again, something that is to be expected from a sporting event – especially one as heated as this – apparently, not a sentiment shared by every onlooker at the rink however.

With just a few seconds left in the second period, the Rebels managed to score another beautiful goal, 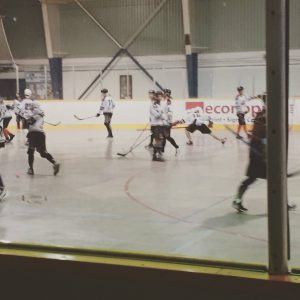 giving them back to the lead. With tensions as high as they already were, this led to a brawl on the floor near Brampton’s goal line. In the heat of the bout, something was shouted from the stands that another fan didn’t agree with. The refs – having just finished breaking up the indiscretion taking place on the floor – moved to the stands with the intention of easing the situation that was beginning to arise. When Brampton’s players caught wind of what was happening, they rushed to the stands to get involved. This was about the time that this writer decided that it was best to heroically leap off the stands, out of the way of any conflict. It seemed as though things were going to get dicey.

The next few minutes were a blur of shouting, insults, spitting, and a whole lot of “hold me back!” A good number of the spectators left, presumably because they felt the night was going to go in a violent direction. Luckily, no one in the stands actually came to blows, and the players returned to the floor to finish out the last three seconds of the period.

The game was finished, and the Rebels won with a score of 6-5. At this point, we noticed that several police cruisers were arriving on the scene, and no less than ten officers were entering the rink. We decided that this was a good time to make our leave. It was obvious in the early goings of the game that this was going to be an exciting, potentially heated match, but we never would have guessed that we’d be giving officers of the law a respectful head nod and an  awkward “hello” on our way out of the arena. It was a game that just proved to us that you can never really anticipate the way a game of ball hockey is going to go.

For all the latest news in the world of ball hockey, stay tuned to stickskillz.com. For up to the minute developments in the sport, don’t forget to like us on Facebook and follow us on Twitter @stickskillz.