BHi St.Catharines played host to the 1st tournament of the 2017 Youth All Ontario Cup, the Niagara Invitational, April 7-9 in what was an excellent showcase of youth ball hockey. Teams travelled from across Ontario (Brantford, Welland and St.Catharines) to compete in 3 divisions: Peewee, Bantam and Midget and put on quite a show. 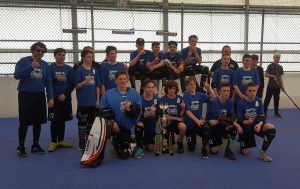 In the Peewee division, Niagara Rampage flexed their muscles all weekend and established themselves as a dominant force in 2017. The Rampage rolled through the round robin racking up 24 goals while goalie Reid Woodcock only allowed 3 against. In the Championship game, the Rampage ran into one of their rivals in the Welland Redlight Rebels who are always ready to compete with the division’s top teams. Niagara Rampage built a 3-0 lead in the first period but the Rebels responded in the 2nd period with 2 goals of their own. Unfortunately for the Rebels, the Rampage also found the back of the net twice ending the middle frame with a 5-2 lead. Both teams traded goals in the 3rd period with the Rampage holding on for a big win 6-3. Niagara Rampage had a solid tournament from several key players; Nathan Zadorozny 6 G, 9A, Parker Henderdee 3G, 6A and Hunter Zoccoli 4G, 5A. The Rebels will recharge and can count on Nik Canjar 5G, 0A and Brodie Morabito 1G, 4A to lead the way. 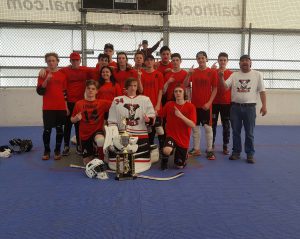 The Bantam division had three teams participating that know each other very well from the Youth All Ontario Cup.  Much like in the peewee division there was one team that established itself as an early favorite for the weekend and in the Bantam division it was the Welland Rebels. After a 4 game round robin, they had a perfect 4-0 record and a dominating 27 goals for and 4 goals against, earning them a spot in the final. The remaining two teams, Brantford SWAT and Welland Bandits battled in the semi final for a chance to take on the Rebels in the final. In the end, the Bandits moved past a short benched SWAT team for an all Welland Bantam final. In the Championship game, the Rebels got out to an early start and tallied 3 goals in the first period. They would go on to add 4 in the second and cruise to a 7-0 victory over the Bandits thanks to strong play from their goalie Logan Nagy. The Rebels got lots of scoring from several of their players; Eric Joyce 6G, 4A, Colby Flett 2G, 7A and Anthony Legault 5G, 4A. Bandits are sure to rebound from the loss thanks to strong play from Aiden Dube 5G, 8A and Austin Robias 7G, 2A. 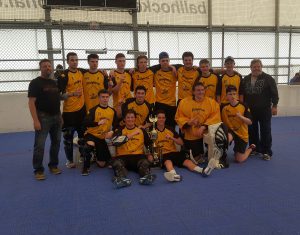 The Midget division saw four teams competing for the Niagara Invitational crown. The defending 2016 Champions, Welland Knights, returned with a core of players from 2016 but a new look roster for 2017. The Knights played well throughout the round robin coming out with 2 wins and tie against the Niagara Aces (formerly the Niagara Thunder). The Aces also moved through the round robin achieving the same record of 2 wins and a tie. The two teams would meet in the final in a matchup of two excellent Midget teams. At the end of the 1st period, both teams traded several scoring chances but it was only the Aces that managed to reach the scoreboard holding a 1-0 lead. In the 2nd period, the Welland Knights showed why they are the defending YAOC Midget Champs and scored 2 goals of their own to get right back in the game. As the period ended, the Aces tied the game back up at 2-2 heading into the final frame. In the 3rd period the Aces exploded with 3 goals, 2 of them coming from Dean Bartolini, and managed to hold on for the victory with a 5-3 win. Both teams can boast a strong cast on their roster but a few stood out, Aces; Jesse Masterson 13G, 0A & Domenic Pascente 7G, 5A, Knights; Kyle Groetelaars 10 G, 2A &  Daniel Legault 7G, 5A.

What a great weekend of youth ball hockey on display in St.Catharines! We can’t wait to see this talent and more in the next installment of the Youth All Ontario Cup, June 23-25 at BHi Brantford. Special thanks to Bruised Camera who took some fantastic photos of the event as usual!