After we’ve all recovered from the Pittsburgh Penguins defeating the Nashville Predators to capture the 2017 Stanley Cup, we only have a few days to recuperate because there is some big NHL action rolling out this week.  Starting this past weekend, the NHL made available the list of protected players from each NHL team in advance of the Las Vegas Knights NHL Expansion Draft on June 21.  The NHL will follow that up, that evening with their annual NHL Awards, where they will recognize the cream of the crop from the 2017 season.  Finally, a busy week will wrap up on June 23 with the NHL Entry Draft, where the very best prospects will wait eagerly to hear their name called.

The last NHL Expansion Draft took place in 2000 when the Columbus Blue Jackets and Minnesota Wild joined the NHL.  This year, the 30 existing NHL teams had to submit their list of protected players by June 17, and this list was then released to the public on June 18.  Teams must protect seven forwards, three defensemen and one goaltender or eight skaters (forwards/defensemen) and one goaltender.  From there, Vegas will select one player from each team to complete their roster of atleast 14 forwards, 9 defensemen, and three goalies.  These selections will be announced on June 21.

Some names already floating around that might find their way to the bright lights of Vegas include: 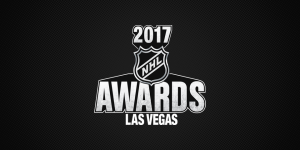 The NHL Awards will once again honour the top players and coaches from the past season across a variety of different categories.  And without further ado, the nominees are:

Hart Trophy (Most Valuable Player To His Team)

Ted Lindsay Award (Most Outstanding Player As Voted By The Players)

Finally, the week will wrap up with the 2017 NHL Entry Draft.  This special event can be the most incredible or heartbreaking professional moment for the many prospects who are hoping to get their crack at the NHL.  Here are our Top 10 Picks:

As we reported earlier, the New Jersey Devils will lead things off with the first overall pick.  Click here to see how the remainder of the first round will play out, barring any trades.