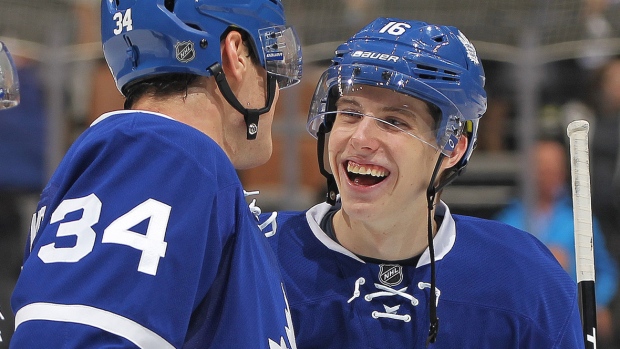 Chalk one up for the little guys, or in this case, little guy.  Mitch Marner stands 6’0 and weighs 170lbs soaking wet.  He’s plays centre and was drafted 4th overall in 2015 by the Leafs.  He was a dynamo in junior, plying his trade with the powerhouse London Knights for 3 years, racking up 301 points in 184 games.  He was lauded for being an offensive star but pundits also deemed him to be too slight, not strong enough to go toe-to-toe with the big boys of the NHL.  It would take time “they” said for him to fill out, get stronger and round into a complete NHL player.

Cut to 2016; Auston Matthews was all the rage.  Matthews, the kid who grew up playing grassroots hockey in Arizona, who spurned conventional norms and went over to Europe to play professionally instead of going the college or major junior route.  Matthews was going to be “the guy,” the one who the not-so-subtle tanking Leafs were going to scoop up first overall and tear up the league.  It rang true, at least for 1 game.  As if it was written in a script, Matthews had 4 goals in his NHL debut and immediately, sports media outlets everywhere were anointing him the “next one.”

No rookie in the history of the NHL has ever scored 4 goals in his NHL debut.  The bar was set, this kid is must see TV.  NBCSN suddenly began picking up the broadcast rights to Leafs games, something that would have been unimaginable a year ago.  They were talking about him on the Dan Patrick Show; a daily, nationally broadcast sports radio show in the US that almost never talks about hockey.  Do you know what comes with all the attention and spotlight? Pressure—lots of pressure.  Auston Matthews is 19 years old, playing in one of the most overexposed sports markets in North America.  Can you guess what happens to a 19 year old when an entire continent is focused on every move you make on the ice?  That spotlight becomes brighter and brighter and that attention begins to sound louder and louder.  The end result—a highly publicized scoring drought.

Did you already forget about Mitch Marner?  Don’t worry, you’re not the only one.  The entire league, and to some extent the Maple Leafs, had made Marner a bit of an afterthought coming into this season.  He’ll score a few goals, put up some points but hey, no pressure kid, you didn’t score 4 in your debut, we don’t expect the world of you.  Since scoring 0 points in his NHL debut, Marner has 16 points (7G, 9A) in 17 games.  He’s 1 point behind veteran James Van Riemsdyk for the Leafs scoring lead—oh, he also has 3 GWG, leading the Leafs in that category.  It must be a nice feeling for Marner, playing without that pesky pressure.  If Marner suddenly hits a 5-game scoring drought, a few people would notice, maybe even ask him about it a couple of times but there still won’t be that pressure.  He wasn’t drafted first overall, he wasn’t expected to be the entire solution instead of being only a part of it.  Anything Mitch Marner accomplishes this season will be considered a success because the expectations for him weren’t sky-high. 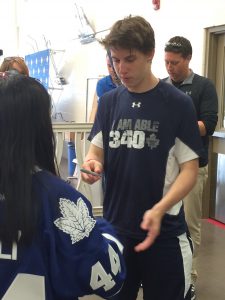 This isn’t a slight on Marner, in fact, it’s the opposite.  I remember being at Leafs training camp in the summer of 2015 and while most people were focusing on William Nylander, I paid particular attention to Marner.  I remember one dry land drill that all the prospects had to perform over and over and over again.  One stick was laid down horizontally in front of each player and they had to sweep a puck around that stick without switching their stance.  It was a monotonous and boring drill but I remembered watching Marner and he was so focused and honed in on this task.  Even when the other players would stop and have a look of slight apathy on their faces, Marner kept his head down and never broke focus.  I got the sense at that moment that Mitch Marner would be a very effective NHL player sooner rather than later.

Two weeks ago on my podcast, I talked about how it wouldn’t be out of the realm of possibility that Marner be in the Calder conversation come the New Year.  So far, he’s continued to prove me right.  I covered the Leafs vs Panthers game on November 17th; it was my first opportunity to watch Marner, Matthews and the rest of the rookies in person.  Watching Marner play live further galvanized my opinion of him; of course, this little play helped.  He was good in all zones, was rarely knocked off the puck and his back checking was on point.  The next time you’re wondering why Marner is outplaying Matthews so far in this young season just remember: It’s easier to play to your potential when the weight of expectation isn’t squarely on your shoulders.