The Rec Division opened up Sunday at the April Fools OBHA Winter Provincial ball hockey tournament with four quarter final match ups after a very competitive round robin series.  In the hunt for the championship were the London Gulls, Toronto Hawks, Hamilton Lightning, Hamilton Haze, Rebels, Healthy Scratches, Ottawa Magic, and the Alpacas.  After some closely fought playoff round battles, the Hamilton Lightning would capture the division championship with a 5-1 win over the London Gulls.  This tournament was co-hosted by the Ontario Ball Hockey Association (OBHA) and Ball Hockey International (BHi).

In the first game, the London Gulls controlled the Battle of the Birds from the outset, cruising to an easy 7-0 win over the Toronto Hawks.  A standout game from Gulls’ Kyle Dicicco (2G 1A) helped them advance to the semi-final.

It was a similar story in the next quarter final as the Hamilton Lightning handled the Alpacas enroute to a 5-2 win.  The Alpacas would battle down to the final seconds but the Lightning lead was too much to overcome.  The Lightning were led by Brandon Agnew (1G 2A).

In the third quarter-final, the Hamilton Haze would jump out to an early 1-0 lead only to see Ottawa find their legs and build a 2-1 lead heading into the third.  The Haze would pull out all the stops, applying constant pressure in the final period and would eventually tie up the game with an empty net to send the game into overtime.  Nothing would be settled in OT, which means one thing … shootout!  The first four shooters for each team couldn’t solve the opposing netminder until the Haze’s Patrick Digiancinto would find the back of the net and give the Haze the 3-2 victory.

The second semi-final was a Steeltown showdown with both Hamilton teams facing each other.  The Lightning would strike first, notching 2 goals in the first period, giving them the early lead.  In the second, Haze goalie, Bryan Blancher stood on his head to keep the team in the game but ultimately the Haze would still trail by 2 going into the third.  In the final period, the Lightning would add some insurance half way through the period and go on to a 3-0 win. 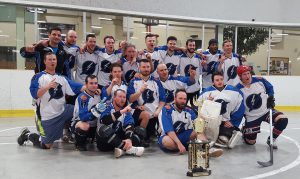 Check in tomorrow for a full re-cap of the Intermediate Division at the 2017 April Fools OBHA Winter Provincial.