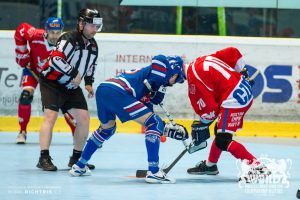 Through the round robin, the host Team Czechia showed they were the team to beat and were looking to keep the gold medal on home turf.  They finished up the round robin with a 4-1 record, their only loss coming in a 3-0 defeat at the hands of Team Canada.  Similarly, Team Canada finished their round robin at 4-1, their lone loss coming at the hands of Slovakia.  Rounding out the top 4, and also advancing to the playoff rounds were Slovakia (3-2) and Czechoslovakia (2-3). 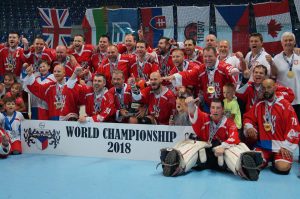 Based on the standings the semi finals were set and would see (1) Czechia taking on (4) Czechoslovakia and (2) Canada versus (3) Slovakia.

In the semis, Canada would get their redemption from the round robin with a hard-fought 3-2 win over Slovakia.  Meanwhile, Czechia cruised to a 7-2 win over Czechoslovakia, setting up a Czechia vs. Canada final the next day.

In the final, Czechia made a statement with a dominant performance, easily dispatching Team Canada 8-1.  The host nation truly ran away with this tournament and set the tone for expectations in 2019.  Congratulations to Team Czechia on winning the 2018 Men’s Master’s WBHF Championship!

Stay tuned to Stick Skillz as we head to Moscow, Russia to catch the WBHF Men’s and Women’s 5-on-5 championships.  The tournament kicks off on Tuesday, June 12, and you can follow all the action with us; follow us on Facebook, Twitter and Instagram for scores and highlights.