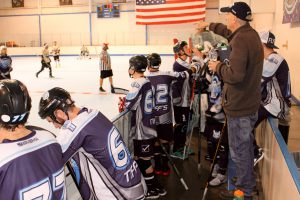 March 31st, 2017—Hamilton, ON—While the basketball world is gearing up for the Final Four in NCAA’s March Madness, the ball hockey world had it’s own version down in Philadelphia, PA.  March 24-26th saw the best teams throughout North America gather in the City of Brotherly Love, battling for the title of best in ball hockey.  Included in the tournament were Men’s A/B and Women’s A/B and every single athlete brought each game.

Stick Skillz was lucky enough to hit the road with members of Men’s A team, the Barrie Flyers, and got a first-hand look at the amount of preparation and work that goes in to a tournament like this.  We hit the road, caravan style, with members of the Barrie Flyers as well as last year’s reigning Men’s A champs, the Niagara War Pigs.  The early departure time on a rainy Friday afternoon did not dampen the spirits of the players or their enthusiasm toward this prestigious event.  I rode shotgun with Flyers forward, Bryan McGahey and he shed some light on what this tournament means to the players who participate in it.  “The North American Ball Hockey Championships don’t only bring the best there is in the sport together, it also allows you to really bond with your own teammates,” said McGahey. 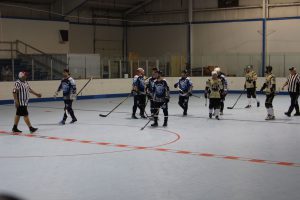 This bond was on full display at each rest stop, where the team demonstrated their playfulness and some good-natured ball-busting.  Even more entertaining, was when Flyers d-man, Dan Ruddach, was banished from the War Pigs truck for being too chatty and ended up riding with us.  “You’ll see, those guys will be begging me to ride with them again,” Ruddach chimed, “I bring the fun on road trips, those guys are missing out.”  About 30mins later, we looked back to see Ruddach snoring in the backseat.

After close to 9 hours on the road, we finally arrived at the team hotel in Bensalem, PA; a little suburb just outside of Philadelphia.  Upon entering the lobby of the hotel, players from all over the continent greeted each other, remembering one another from past tournaments.  This showed me the brotherhood and sisterhood these players share.  They each take their craft very seriously and they all want the other to succeed.  “All these ball hockey players are really solid people who really care about the sport,” said McGahey, “it’s like a mini reunion whenever we come down here.”

After settling in, it was time for the Barrie Flyers to have their team meeting.  This would be the time that the Flyers could work out a game plan and figure out how they’ll navigate the tournament.  Each team will play 3 games in a day, so there isn’t much time in between to work on strategy—this makes these team meetings all the more important.

Saturday, March 25th, the tournament kicks in to high gear.  Though a handful of teams had preliminary games the previous night, Saturday is when the real competition begins.  The Flyers open up their tournament, facing off against the best team in the U.S., the Boston Saints.  After jumping out to a 2-goal lead, the Flyers ran out of gas and ended up losing their opening game, 6-4.  They didn’t have much time to dwell on the loss because 2 hours later, they squared off against the Sloth Fathers.  Both teams had trouble getting the ball to settle for them and the game was locked in a 0-0 tie until the Sloth Fathers got a lucky bounce late in the 3rd, winning the game 1-0.

At this point, the Flyers were a frustrated team.  Head coach Sam Yerex did his best to really his troops and keep morale high.  The team had a few hours until their 3rd game of the day and some players decided to head back to the hotel to decompress.  Others stayed behind at the SportsPlex to scope out the competition.  Though the Flyers had lost their first 2 games, they still had a chance to advance to the round of 16, if they could score 5 or more goals in their game.  Their opponent would be the Hull Volant, who had won their first 2 games of the tournament.  After getting shutout their last game, the Flyers offense exploded and they beat the Volant 7-1, guaranteeing them a spot in the round of 16 on Sunday. 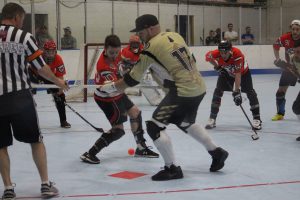 There wasn’t much time to celebrate.  By the time the team got back to their hotel, it was 10pm and their game the next day would be played bright and early at 8:20am.   The Flyers round of 16 opponent would once again be the Sloth Fathers and the guys were looking for a little redemption after losing to the Sloth’s the previous day.  They played arguably their best game of the tournament but once again fell just short, losing by a score of 3-1.  It wasn’t the outcome they were looking for, but they were still happy with their effort.  “It sucks to lose, every guy here plays to win but at the end of the day, we fell just short but gave it all we could,” McGahey explained.  “I can’t wait to be back next year.”

After witnessing the NABHC first hand, I was impressed with just how grand the tournament was and the calibre of talent was off the charts.  I also had the pleasure of shooting a mini-documentary featuring Bryan McGahey and the rest of the Barrie Flyers.  That mini-doc will premiere in Stick Skillz’s April Edition of The Top Cheddar.  If you want to be one of the first to see it, subscribe HERE.

You can find a full list of the tournament winners HERE