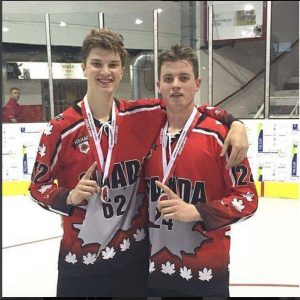 McKenzee MacQueen recently returned from a very successful World Junior Ball Hockey Championships with the U20 Team Canada in Prague, Czech Republic.  The U20 team was one of a trio of teams representing Canada that brought home a gold medal.

After going 4-0 in the round robin, the U20 team cruised to an 11-0 semi-final victory over Hungary.  The win set up a highly anticipated match up with the USA in the gold medal final.  The Americans would put up a fight, however Canada would pull away in the third to go on to a 5-0 victory and secure the gold medal.  It was the final game that MacQueen felt was the team’s toughest challenge over the six day tournament.  “USA plays a similar style to us, and they definitely gave us our toughest game of the tournament.  The score was 2-0 going into the third, which was a little scary but, we poured it on and finished with an empty net to make it 5-0.”

The World Junior Ball Hockey Championships was MacQueen’s first experience with international competition.  Despite the high level of play, he had a strong tournament notching 1 goal and adding 3 assists in 6 games.  “The biggest adjustment I had to make was to try and get rid of the butterflies, just play my game, and understand my role on the team.  I didn’t have to do anything crazy, just play simple hockey.  We had the guys to go and score and do everything we needed; I just needed to play solid hockey.”

Despite the opportunity to travel and play in Europe to play against top level competition from all over the world, MacQueen’s highlight of the tournament came from within the Team Canada dressing room.  “Honestly, the highlight of the trip for me was the friendships I made throughout the week in Prague and throughout the week and a half of training camp.  The group of guys selected for the team couldn’t have been better thought out; I feel like no other group of guys could have made the friendships we did in the time we had.  I went in knowing no one, and by the end of the tournament, I was good friends with all of my teammates.”

These international events are instrumental in growing the sport of ball hockey all over the world.  This impact was not lost on MacQueen who said, “Just from talking to people about my experience, what it has done for me, and where it has taken me has motivated people who have never played to join a local league, or just shoot the ball in the street.  I think it’s great for the sport, and hopefully one day leads ball hockey into the Olympics.”