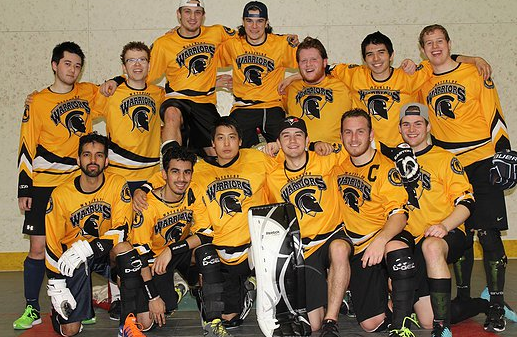 In the U.S., college athletics are a near religion in most of the country.  Basketball, football and baseball games are consumed at a ferocious rate and rival those played in the pros.  In Canada, however, our thirst for sports on the collegiate level is almost non-existent.  There’s tepid interest in the Vanier Cup, which is the Canadian equivalent of the College Football Championship in the U.S. and very few hockey fans could name 5 players on university hockey teams.  There are a myriad of reasons for this; small population, poor organization and less-than-stellar marketing attempts.  At least one person is hoping that won’t be the case with the newly formed Ontario University Ball Hockey League.  We recently sat down with League Scheduler and Expansion Teams Assistant, Tom Costello, to find out how the OUBHL began and where it hopes to go.

I got involved when the intramural program at Carleton wasn’t competitive enough. My friends and I won the finals 10-2. After stumbling across the existing University Ball Hockey system, three of us began planning for the following year. The following year we ran tryouts and the Carleton Ravens team was off running. The first year was rough, finishing 6 wins and 20 losses. After practicing and experience, the team then finished 18-9. My current role in the league is scheduling, and providing assistance to expansion teams.

The league was created by the captains of the existing 4 teams came together to get a more structured system, compared to the annual year end tournament. Teams had a hard time gauging where they would need to be for this tournament, and often hurt the quality of play. By playing more throughout the year, teams improved a lot more and produced a better team being sent to the OBHF Provincials. The key players were Rene Vandenboom (Brock) , Connor Prebianca (McMaster), and Zac Hogg (Waterloo).

The schools will have three different levels, school club, competitive club and varsity. With each level comes more funding, and more rules. Varsity teams are often fully funded. We currently have 3 competitive clubs and 1 school club. A competitive club receives $2000-4000 and possible additional benefits such as practice time, branding help, physiotherapy and athletic therapy. A school club receives under $800, with very little, if any additional benefits. The key factor is the rules in which teams are willing to follow. This presents different challenges, the variation in support gives some teams more assistance than others.

The league often gets approached by 2-4 different captains every year. Once contacted, the other team leaders will help give resources and assistance to give the new captain the best opportunity at success. The key is the financial responsibility and recruitment. The first season is often the most difficult, finding a full team is often the most difficult part. The key to building a team is finding a few key members and following the rules outlined by the school. The first step is to get enrolled as a club at the school and find another few members to help build the foundation. It’s not impossible, but it is difficult to build a team on your own.

The regular season consists of 18 games, 9 at home, 9 on the road. The games are a standard ISBHF game, three 15 minute periods. Each team has a home facility where they play their games. Currently, each team plays one another 6 times, 3 at each team’s home rink.

The season is going very well. Teams are all showing significant improvement, which is a key in the league due to the high turnover rate. Teams can vary in skill from one year to another based on the amount of graduates the team had in the previous year. Some of our weaker teams who are rebuilding are taking great strides and showing strong potential towards future years. Our stronger teams look to build their rosters and make a run for the championship. The team to watch is the Waterloo Warriors, after making changes to the bench staff over the summer and building on their young roster they are going to be strong in the coming years.

OUBHL games are officiated by OBHF certified officials borrowed from the local leagues. We are always accepting and helping train new officials. Anyone interested shouldn’t hesitate in contacting the league.

The new year often brings the playoff push, league championship and provincial championship. Our teams come back from their fall exam break itching to move up into the playoff picture. The championship is held in March over a single weekend. This year Waterloo was awarded the championship, and for the first time the finals will be played at the Queensmount Arena. Expansion is always a key goal, as is growing the game of ball hockey. We are always willing to take expansion teams and help new team captains.