This past weekend, ball hockey teams across E, D, C, and B divisions gathered in London, Ontario to compete in the All Ontario Cup (AOC) April Fools Tournament & Ontario Ball Hockey Association (OBHA) Winter provincial held at both Ball Hockey International (BHi) London, and Stronach Arena. The Sun was shining, the weather was warm, so there was no better time to get out and enjoy some great games of ball hockey! From the B teams all the way down to the E division, there were some heated games and exciting moments that we’re going to outline for you right here.

As we’d written about in our preview, there were quite a few teams coming out of London, ON. but we knew that some of the Hamilton teams were going to put on a show. When it came down to it, only two of the London teams, 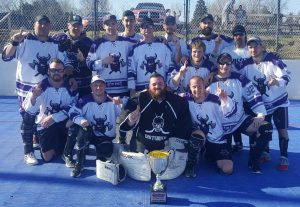 the Warriors and the Dirty Dozen, made it to the quarter finals, and they were both beaten out by teams hailing from Hamilton (the Hawks and Steel City Vikings, respectively). Heading into the Semi-finals, the Niagara Merge won handily against the Hamilton Knights with a final score of 4-1, and the Steel City Vikings beat the Hamilton Hawks 3-1. Niagara Merge definitely impressed over the weekend, they were able to deliver in some crucial moments. The Niagara Merge moved from the 5th seed to playing in the finals, which is no easy feat, but they pulled it off. We knew the Steel City Vikings were going to be a team to watch out for though, and they didn’t disappoint at all. Not only were they able to defeat Merge in the championship game with a final score of 3-1, but they didn’t lose a game all tournament. They definitely took this weekend as an opportunity to show everyone what they’re made of.

Going into the weekend, the D division was a bit of an unknown quantity. We knew that we’d be keeping an eye on the London Bombers as they’d be looking to make up for their loss last in last year’s finals. We also wanted to keep 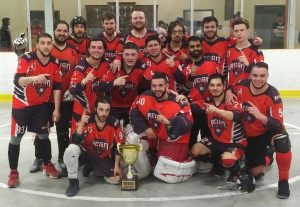 an eye on the Hamilton Ducks. They impressed us at the Spring Teaser this year, and we wanted to see if they could push the envelope and bring home first place. Both of these teams made it to the semi-finals, but the Bombers were beaten out by the Toronto Knights, and the Ducks came up short against the Toronto Reign, who won with an impressive final score of 4-1. With two Toronto teams in the championship, there was quite a bit of parity in the final game. It didn’t seem like either team really had an edge. The game moved into overtime before the Reign would finally score the game winner, crowning them division D champions.

The C division was one that we were particularly looking forward to. With teams like the London Rebels, Hamilton 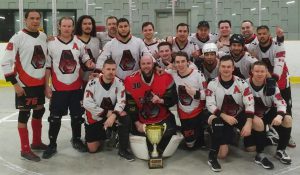 Haze, and Hamilton Outlaws – who took home first place in the Barn division at last year’s Weekend of Champs Tournament – in attendance, we knew we were in for some serious action. We weren’t wrong either. The Hamilton Outlaws really did put on a hell of a show, enough so to earn them the second seed and a spot in the semi-finals. They were beat out by the Scarborough Stingers, a team that we couldn’t help but observe, as they went game after game during the round robin shutting out their opposition.

The semi-finals saw some of the tightest action of the whole tournament. The Stingers and Rebels stood at a stalemate, neither team willing to concede the loss. The game eventually ended in a tie score of 2-2, moving the Stingers into the championship final. The Outlaws almost met their match during their semi-final game against the London Outpatients as well. This was a high scoring game, and the Outlaws just squeaked by with a final score of 5-4, setting them up to take on the Stingers in the Championship game.

The Stingers really showed off their prowess in the final. No matter how hard the Outlaws fought, they were unable to cover the ground they needed. The game ended with the scoreboard leaning heavily in the Stingers favour at a score of 6-3. This was a pretty impressive win for the Stingers seeing as the Outlaws had previously played as an intermediate team during this year’s Niagara Winter Classic.

We were confident that the B division of this tournament was going to be a real barn-burner. With talented teams in 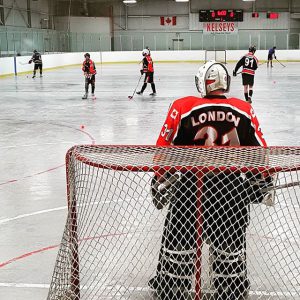 attendance like the London Gulls, the London Reapers and the St. Catharines Punishers, there was no doubt that this division was going to be home to some exciting games of hockey.

There was an intimidating level of parity across the teams in this division. Coming out of the round robin, the St. Catharines Punishers, London Reapers, and Toronto Titans each had four points – the Punishers with a record of 2-1-0, and the Reapers and Titans sitting at 1-0-2. Niagara Nightmare also made their way to the semi-finals, and it was nearly impossible to call who was going to make it to the final game.

First up was the Punishers vs. Nightmare – a game that had to move into overtime. Eventually, Nightmare were able to make a shot count, winning the game with a final score of 3-2. The Reapers were just able to eke out a win against the Titans as well, 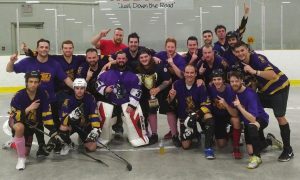 with a final score of 2-1. You could tell that none of these teams were about to take any chances – the games were lower scoring but incredibly tense.

The final game was where we saw some real energy. Niagara Nightmare were able to take their lead and hold onto it. By the end of the first period, they were up 4-2 against the Reapers. The Reapers fought hard to close the gap, eventually bringing them to a score of 4-3, but just they couldn’t make up the rest of that deficit by the time the final buzzer sounded. Both teams wanted it, but in the end Niagara Nightmare went home as the first place champions of B division.

B division’s final standings can be found right here.

There were some truly exciting games (and even a few surprises) out of this year’s April Fools Tournament. Not only were teams bringing their A game, but the winners of each division now also qualify for the OBHA Provincial Championship this August. Congrats to all the winning teams, we can’t wait to see what you’ve got in store for us in a couple months!