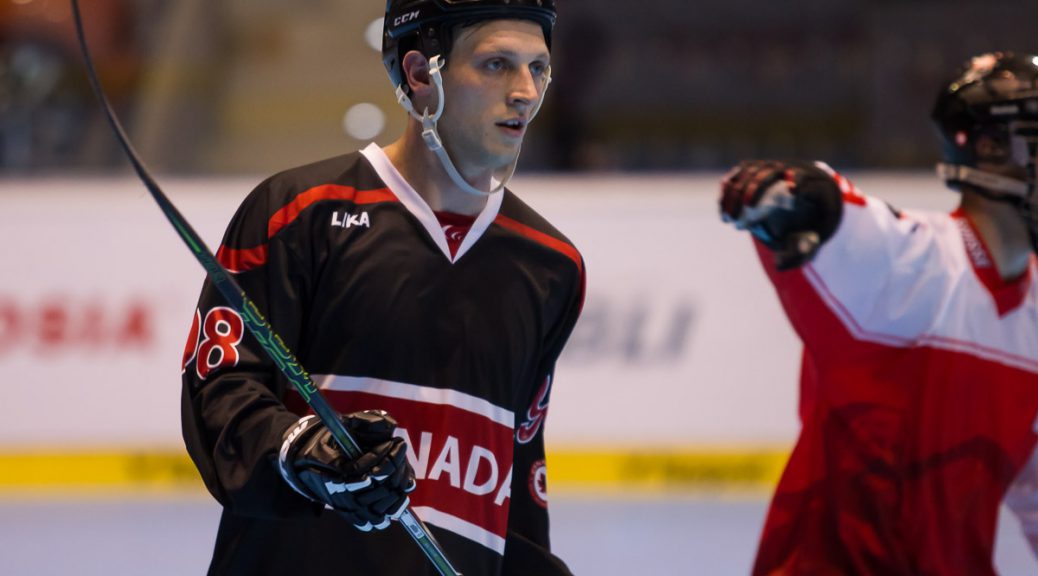 It’s early June, and the International Street & Ball Hockey Federation (ISBHF) World Championship is here. Being selected to represent your country as a member of Team Canada is obviously quite an honour, and accomplishment. One in only three players (excluding goalies) from Ontario chosen to play on Team Canada this year is Brian Szolga. Szolga has played on teams like the Niagara War Pigs, and was gracious enough to sit down and answer a few questions regarding the selection process, and what we can expect from this year’s games taking place in Pardubice, Czech Republic.

StickSkillz: Walk me through the process of being named to Team Canada for the upcoming ISBHF World Championships.

Brian Szolga: Players usually get scouted from the Provincial & National Tier 1 Tournaments. The 2016 Canadian Nationals which took place in Richmond, British Columbia last August would be when a majority of the decisions were made by the Team Canada management to fill the roster. Getting to that tournament is the tough part. You have to play in a CBHA sanctioned Tier 1 league. In this case, I play for the Niagara Warpigs in the OBHF Premier Division in Toronto. We had won the league last year and earned a seed in the Nationals tournament.

BS: Because the team is comprised of guys that are from each province it was impossible for us to practice together well before the tournament. The ball drops June 1st, so we flew out on the 28th of May and practiced today (May 30th) in the morning and have another practice later this evening. We are using those two practices to go over our special teams and how we want to approach both even strength and shorthanded situations. We have an exhibition game tomorrow afternoon against the Cayman Islands as a final prep for our opening game against Greece.

SS: Ontario is home to some of best ball hockey in Canada. How does it feel to be only 1 of 3 players (excluding goalies) from Ontario to be selected to Team Canada?

BS: It’s a great feeling, obviously. I am proud to represent the province with Canada and [am] hoping to bring a gold medal back to Ontario and put Canada back at the top of the ball hockey world.

SS: You have played in tournaments (nationals, North America’s), how will this be
different?

BS: Both tournaments offer great competition. You play for your home club and definitely give it your best every game. Representing Canada and putting on that jersey is a different story. You’re playing for the whole country and with everything on the line. You go out there and give it 110% every shift and leave it all on the floor every game.

SS: Is this your first international ball hockey experience?

BS: Yes, this is my first international tournament. Knowing that the other two guys from Ontario had been before I asked them what it was like and what to expect. Aside from that I have watched videos from previous tournaments online and it’s definitely the best of the best at these kind of tournaments.

SS: Who are you expecting to be the biggest challenge to Team Canada?

BS: I don’t think you can really underestimate anyone at this tournament. The Czechs and Slovaks are always strong. I think India will surprise some people this tournament. I guess we will have to wait and see.

SS: How have some of your other ball hockey experiences helped you prepare for this event?

BS: I think most of the big tournaments and games that I have played in have kind of shown me where I had to be skill wise. I play 4 or 5 times a week to make sure I’m in shape and constantly playing with a ball. Practice makes perfect.

SS: Since being named to Team Canada how have you prepared both physically and
mentally?

BS: Stretching and hydrating before games as well as having a “routine” in warmups is something I try to keep consistent every game. Running and being in-shape at this level is the most important thing you can aim for. My workouts changed in preparing for the tournament. More cardio, lower weight and more reps to ensure I stayed lean.

SS: Do you feel that you’ll have to make adjustments to your style of play for the tournament? We have seen you both used as a Center and Defenseman.

BS: I don’t think I will have to change up much. I play a pretty simple game. It’s physical in these tournaments so that’s a plus for me. I’m just going to give it all I have each game and hope we come out on top as a group. I have been asked if I’m okay with playing center if I am needed there and said yes, but unless someone gets hurt I’d imagine I will be on defence.

We’d like to thank Mr. Szolga once again for taking the time to answer our questions, and wish him – and all of team Canada – good luck during the ISBHF Championships! Brian is getting ready to compete in the ISBHF Finals today against Greece.

For more news and updates on this tournament, and all things Ball Hockey, keep an eye on StickSkillz.com and follow us on Twitter @stickskillz and Facebook: https://www.facebook.com/BHistickskillz/