This past weekend St. Catharines played host to the 2016 Youth Spring Teaser Tournament, kicking off the first event of the Bauer Youth All Ontario Cup hosted by Ball Hockey International. The tournament featured three divisions and had 15 different teams take the floor over the weekend. Despite the cold weather the tournament was a great success and a number of talented teams left their mark on the Spring Teaser.

The tournament started off bright and early Saturday morning and four teams successfully separated themselves from the pack during the day one games. The Welland Knights finished first in the division, achieving a bye into the semi-finals with a 2-0-1 record during the round robin. The Niagara Thunder were able to capture the second bye with a 2-1-0 record.

The quarter final match-ups pitted Team North (1-0-2) vs. the Niagara Spartans (1-1-1) and the Niagara Titans (1-0-2) vs. The Cherry Pickers (2-1-0). Team North came out strong scoring three first period goals with Dean Bartolini netting a pair.  Anthony Persia of Team North replicated Bartolini’s feat in the second, ripping two goals of his own and extending their lead to 6-0 after two. The Niagara Spartans could not turn things around and Team North buried four more third period goals taking the game by a score of 10-0. The Cherry Pickers vs. the Titans was an odd game. The Cherry Pickers had an extremely short bench in this match-up. The team got themselves in penalty trouble which resulted in a forfeit, as they were unable to field a full team due to their penalty troubles, which resulted in a Titans win.

The first semi-final featured the Welland Knights and the Niagara Titans. Daniel Legualt opened the scoring for the Knights and it held up as the only goal of the period. Dylan Hunt was able to tie the game for the Titans 1-1 early in the second. However, from that point on, Welland took the game over. They followed up with a tally of their own 40 seconds later to take the lead and never relinquishing it from there. Daniel Legualt lit the Titans up collecting two goals and two assists and leading the Knights to a 8-1 victory. The second semi-final was a closely fought battle, with Team North facing the Niagara Thunder. Quinn Campaigne opened the scoring for the North and it held up for almost the entirety of the game. Unfortunately for Team North, the Thunder pushed hard late, pulled the goaltender and found the equalizer with just 32 seconds remaining. The two teams would head to overtime deadlocked at 1-1. The Thunder kept their momentum and scored early in the overtime period with a trickling shot that had eyes and was eventually tapped in by Hollett who found the loose ball in the crease, eliminating Team North and punching their ticket to the finals.

The finals of the tournament was a hard fought battle between two extremely talented teams. The first period opened with goals from both teams and ended 1-1. Welland was able to open it up a bit in the second frame with goals coming from Ty Stadnyk and Daniel Legault. The period ended 3-1 in favour of the knights. The Thunder had their work cut out for them in the third, but Legault was able to slip one past the tendy, extending Welland’s lead to 4-1. The Thunder pushed back with one of their own, but ultimately it was not enough and the Welland Knights took home the Midget Championship with a 4-2 victory. 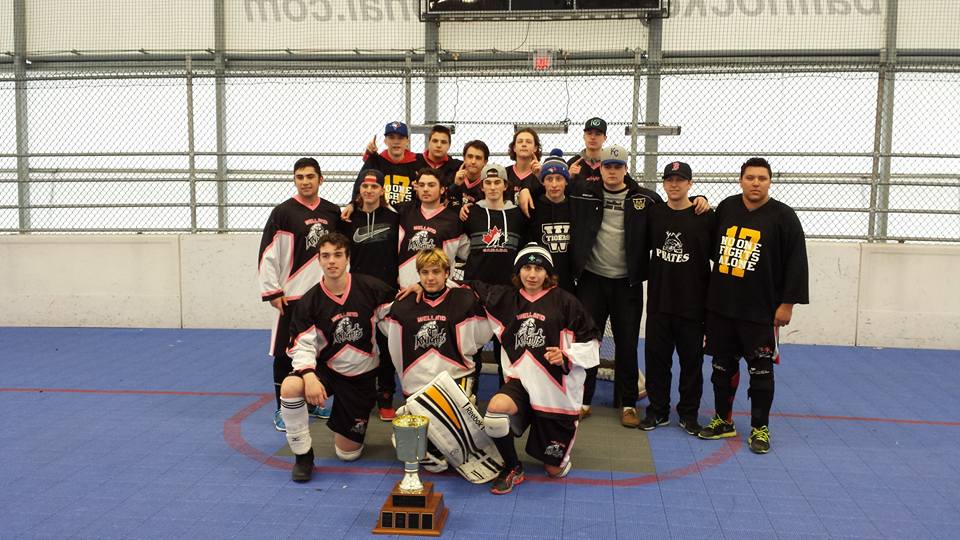 This division was comprised of five teams and hosted some fierce competition. The Bandits were the team to beat all tournament and raced out to a 4-0-0 record to secure number one seed in the division and a match-up with 1-3-0 Sundogs in the semi-finals. The second semi-finals featured the 3-1-0 Little SWAT vs. the 1-3-0 Welland Rebels.

The Bandits and the Sundogs battled hard in the first and the period ended 2-1 with the Sundogs on top. The game remained close in the second but late goals from David Legualt and Carson Eden combined with an early goal from Tanner Mceachern gave the Bandits a 4-3 lead at the end of two. The Bandits proved to be too much to handle for the Sundogs with the third ending 7-4 in favour of the Bandits. In the second semi-final of the division, Little Swat faced the Welland Rebels. Little SWAT dominated the second period with a pair of apples coming from Jake Bloomfield to take a 3-2 lead into the crucial third period. Bloomfield continued to dish getting another assist on Nate DaSilva’s game winning goal. Little SWAT was able to prevail 5-3 and moved onto the finals to face the high flying Bandits.

The Bandits continued their dominate play and lit the Little SWAT team up for four highlight real goals in the first period. Carson Eden had the strongest game of all the Bandits players accumulating a division high six points (3G, 3A). The Bandits teams finished the game on top by a score of 8-1. The lone bright spot for the Little SWAT in the finals of the game was the incredible play of goaltender Alex Mercy. The Bandits outplayed all teams during the tournament and finished with an impressive 38 goals for and only 9 goals against. 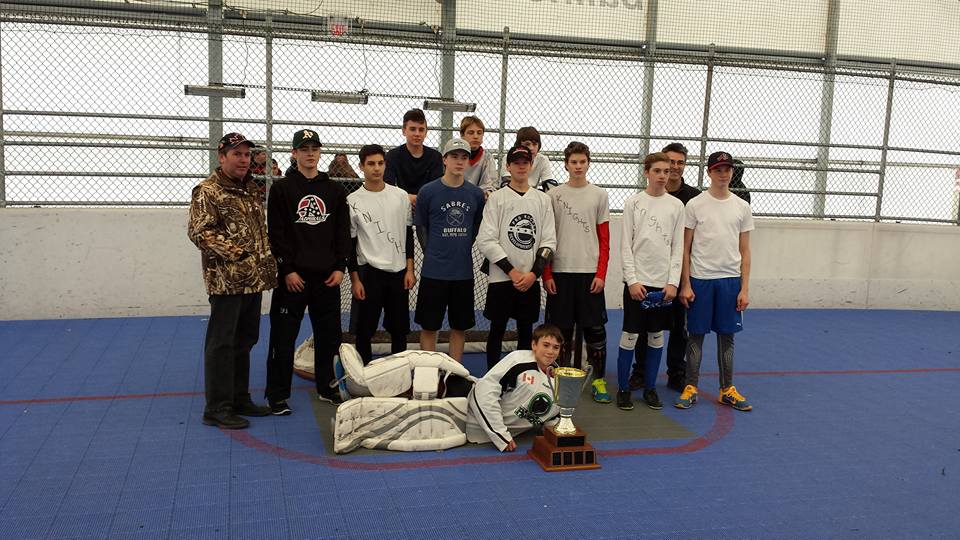 The Peewee division featured two strong teams, the Niagara Junior Rampage and the Welland Redlight Rebels. The two teams faced off in four games over the weekend. Game one was the only game that didn’t finish with the teams separated by one goal. The Niagara Junior Rampage kicked of the tournament Saturday with an impressive 3-0 win over the Redlight Rebels. Game two was a much closer affair, but ended with the same team on top. Nathan Zadoronzy led the charge for the Rampage with two goals, propelling them to a 3-2 victory.

The Rampage carried their momentum into day two of the tournament and dealt the Rebels their third consecutive loss. Matthew Gallardi took the reigns in this one putting up three points (1G, 2A) to lead the Rampage past the Rebels, 4-3. Game four once again saw the Redlight Rebels fall in a one goal game. Despite a pair of assists from Nik Canjar, the Redlight Rebels could not muster enough offence and lost 4-3. The Niagara Rampage relied heavily on their momentum and finished 4-0 on their way to the Peewee division championship. 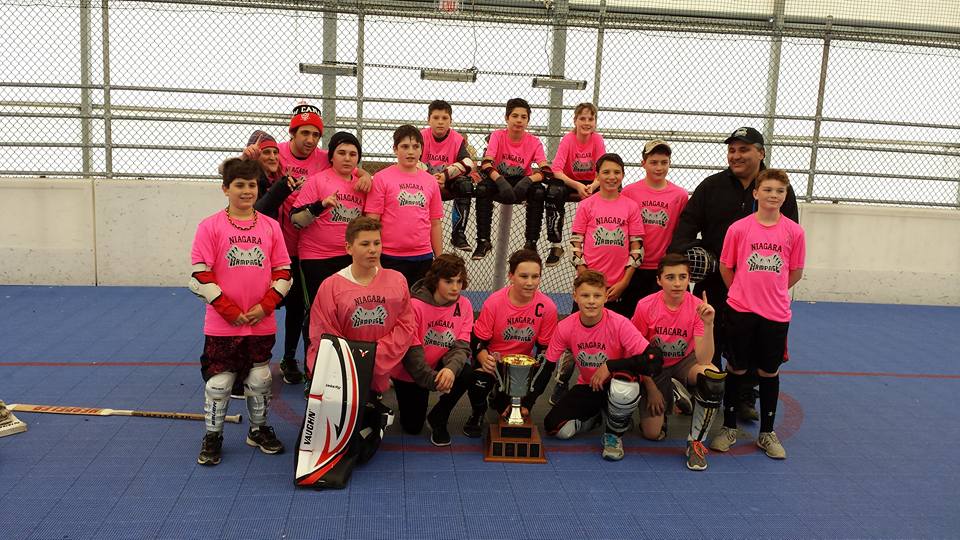 Thanks to all teams for participating, without you the tournament would not have been an overwhelming success. The next BHi tournament comes at the end of April in London, and is a Men’s tournament which is in partnership with the OBHA. The tournament will take place over the weekend of the 22nd-24th. 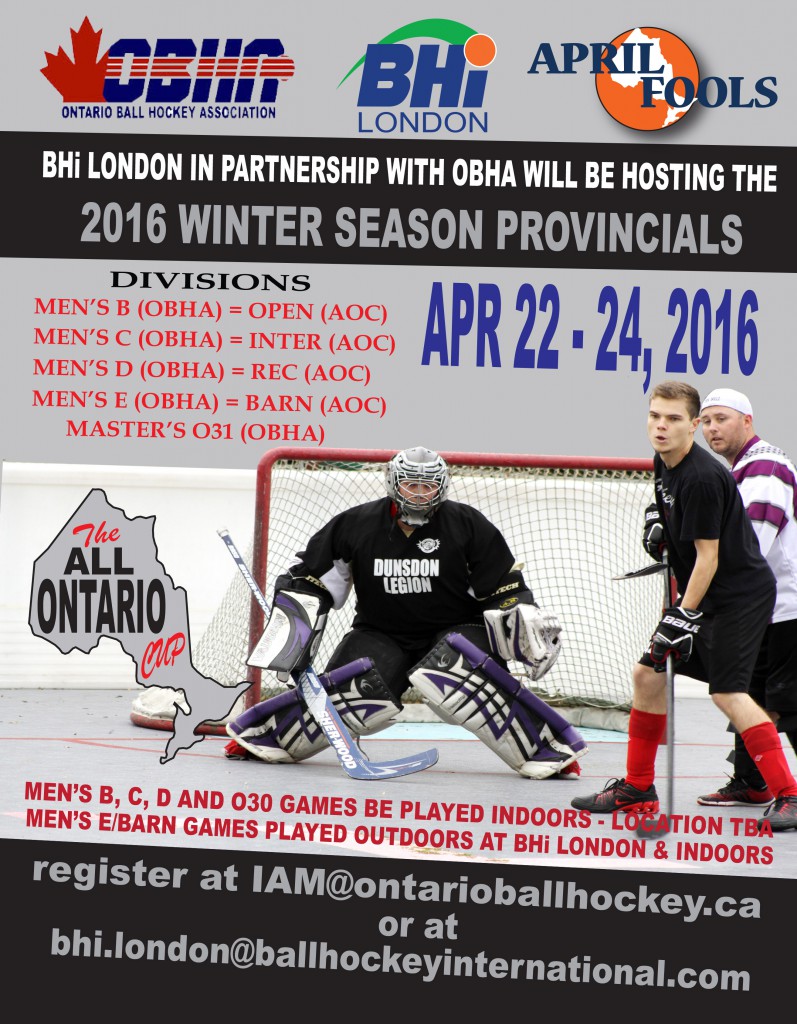