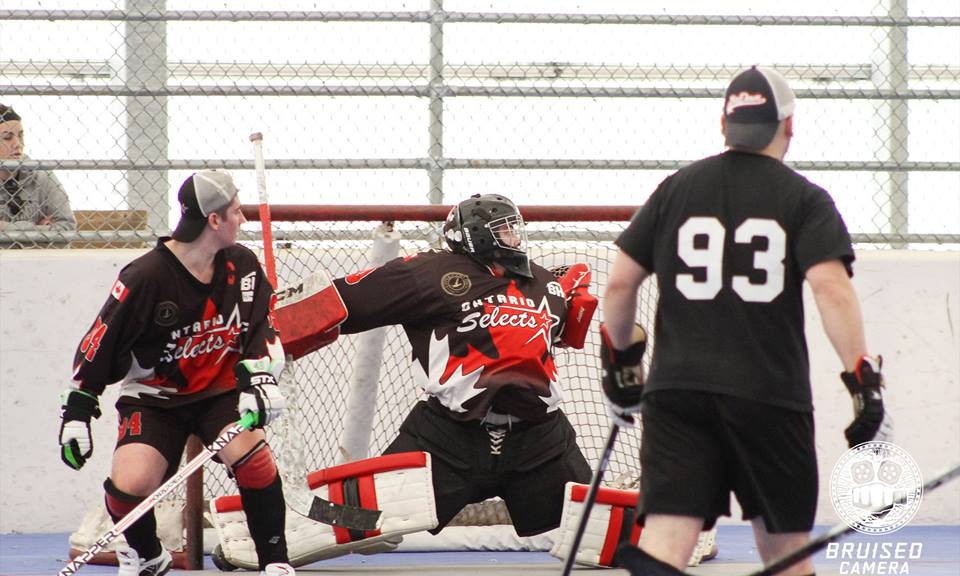 The Adult Intermediate Division showcased three teams, the Punishers, Marvel and the Ontario Selects. The tournament opened on friday with Marvel vs. the Punishers. The game was tight, but thanks to great play from Ryan Nagy (2 G, 1A), Marvel was able to pull out a victory.

Sunday opened with the Punishers vs. the Ontario Selects. The surging Selects were able to win their second game of the tournament 4-1 and improve their record to 2-1. Nick Morin, of the Selects, dominated play and dished out three primary assists in the game. The last game of the round robin featured the Selects vs. Marvel with a bye to the finals on the line. The Selects used their momentum to power through Marvel, winning the game 5-3 and punching their ticket to the finals. The semi finals were set with Marvel vs. the Punishers. Despite losing all round robin games the Punishers defeated Marvel 3-2 in underdog fashion. Mike Neilson scored the unassisted game winner for the Punishers.

The finals was underway and the heavily favoured Selects (3-1) faced off against the Punishers (1-4). The Punishers looked to build on their semi final win. Mike Neilson continued his strong play, finding the net twice unassisted to lead the Punishers to a 2-1 victory. 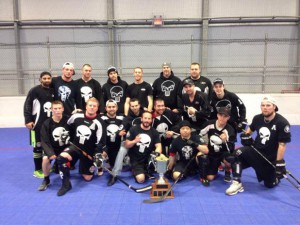 The Adult Rec Division had four teams and the first game kicked off with a match-up between The Healthy Scratches and the Ditchpigs. The Healthy Scratches secured a 3-0 victory with strong play at both ends of the rink. Game two featured the other two teams in the division, the Stoney Creek Savages and the Warriors. Similar to the first game the final score was 3-0, but this time with the Savages claiming victory. Next game on the docket was the Savages and the Ditchpigs. The two teams battled to a 1-1 deadlock. In their third straight game of the tournament the Savages blanked the Healthy scratches, 2-0.

Sunday opened with the Warriors defeating the Healthy Scratches by a final score of 2-1. The Warrior’s Mike Ashley scored two unassisted goals to lead them to victory. In the other semi finals the first place Savages took on the fourth place Ditchpigs. In a stunning upset the Ditchpigs held on for a 2-1 victory with the game winning goal coming from Brad Adams.

The championship game was set, the Warriors vs. the Ditchpigs. This extremely tightly fought battle saw the Warriors hold on for a 1-0 win in a back and forth game. The Warriors grabbed the first title in the 2016 AOC Rec Division. 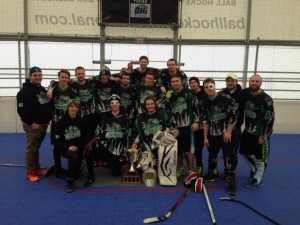 The Barn Division featured 10 different teams and held a total of  15 round robin games. After the dust settled the quarter finals were set and the third seeded Canadian Budz faced the sixth seeded Hamilton Haze. The Canadian Budz played strong defence and received goals from Ryan Bobbin and Chad Conway to eliminate the Hamilton Haze with a 2-0 victory. In the second quarter final match-up the Hamilton Lightening took on the Niagara Thunder Buddies. With a burst of offence the Hamilton Lightening dominated the game and knocked out the Thunder Buddies with a 7-2 victory.

The semi finals kicked off with the Violent Femmes vs. the Hamilton Lightening. Both teams fought hard, but a late goal by Jamie Kewl of the Violent Femmes, propelled them to a 5-3 victory. In the second semi finals the Canadian Budz faced the Bandits. The Bandits continued their domination of the tournament and defeated the Budz 4-3. Brock Walton scored two goals to help the Bandits to victory.

The Adult Barn Division Finals featured two excellent teams, the Violent Femmes vs. the Bandits. The Femmes found themselves in penalty trouble all game and ultimately it cost them . Ry Loney scored the game winning goal for the Bandits, who won by a score of 2-1. 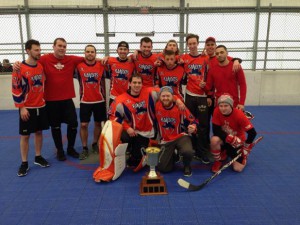 The first tournament slated in the AOC season was a huge success. BHi St. Catharines did an incredible job hosting and allowing the tournament to be such a success. We would like to thank all teams for coming out, without them the tournament would not be possible. Congratulations to all winning teams and good luck moving forward with the rest of the season.

The 2019 North American Ball Hockey Championships were put on by Cool Hockey Events March 22-24 in Pennsylvania, and ...

The 2019 NABHC Men’s A/B and Women’s A kick off this weekend in Pennsylvania and this is quickly shaping ...

After a very competitive 5-on-5 championships a couple weeks ago, the World Ball Hockey Federation (WBHF) continues their festivities ...

This weekend, the Ontario Ball Hockey Federation (OBHF) will be hosting their Men’s Masters A & B (40+) Provincials ...