Monday, April 25, 2016–This past weekend, London, ON played host to the 2016 April Fools AOC & OBHA Winter Provincials Tournament which saw 20 teams take to the floor, spread out over 3 divisions. The weather was warm and the competition was fierce as some of Ontario’s finest ball hockey players battled for the title of Champion.

Things kicked off at 10am Saturday at Stronach Arena as the Outpatients and Punishers secured convincing wins over their respective opponents. Rob Vanwynsberg had a big first game for the Outpatients, netting 2 goals and 1 assist and nabbing First Star honours. Mike Neilson and Dan Setacci had strong games for the Punishers, as they finished first in their division with 6 points (3-0-0). The Throwbacks also had a strong first round, going (2-1-0) while getting good efforts from Derek Hann and Ryan Mcneilly.

The second semi pitted the Ontario Selects against the second-place Throwbacks in a thrilling affair that needed overtime to settle a winner. With the Ontario Selects holding a 2-goal lead well into the second period, the Throwbacks Bryan McGahey scored two goals less than 2 minutes apart to tie the game. After a scoreless third, the game went to sudden-death where Chad Asselstine scored the winner 3:18 in to OT. This set up a first round rematch with the Punishers.

After Mike Martin opened the scoring for the Punishers near the end of the first, it was a tight defensive battle until midway through the second where the teams exchanged goals. The Throwbacks put up a good fight but in the end, the Punishers prevailed and were crowned April Fools Intermediate Champions. Mike Martin and Keith Dale were dominating for the Punishers, each with 2 goals in the Final and 1st and 2nd Stars of the Game. 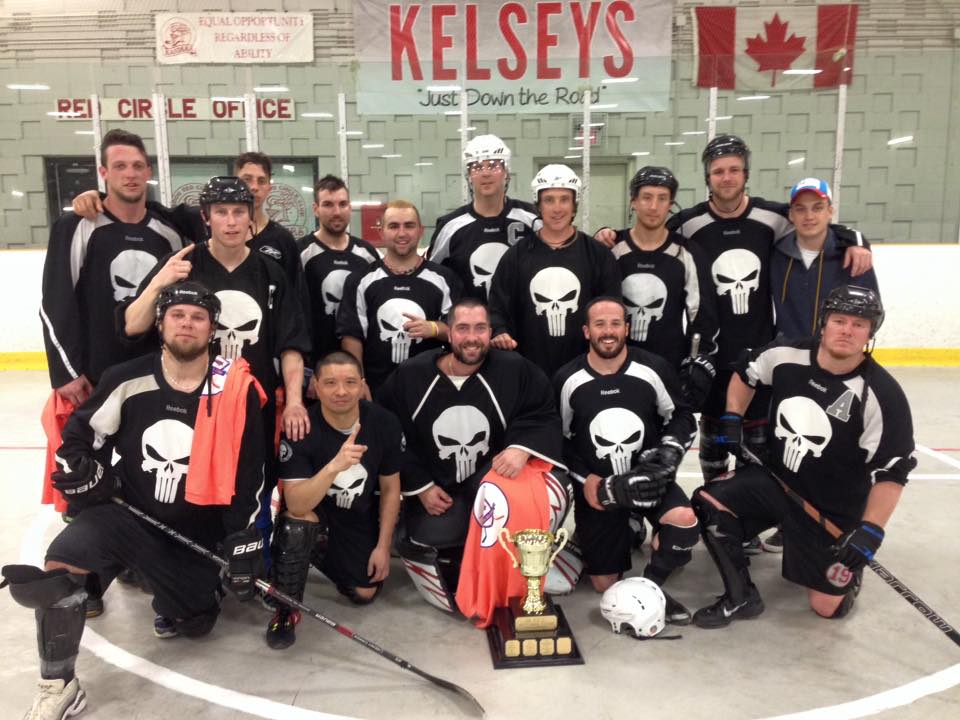 The Rec Division featured 2 strong teams, the Healthy Scratches (3-0-0) and the Niagara Warriors (2-1-0). The two squads pretty much dominated the division on the backs of Taylor Dobbin and Nathan Billard for Niagara and Steve Diluca and John Dungey for the Healthy Scratches.

The first semi-final saw the Healthy Scratches rout the Vicious Alpacas, 7-1. Steve Diluca opened up the scoring 1:34 in to the first and ended the scoring with his second goal of the night, 5:45 in to the third. Jeremy Thebauld scored the lone goal for the Alpacas and the game featured no penalties.
The second semi-final had the Rebels facing off against the Niagara Warriors in what should have been an easy victory for the Warriors. The (1-1-1) Rebels, however, had other plans as they beat Niagara 3-2 and earned their spot in the final. It was a full team effort for the Rebels as they got goals from 3 different players.

In the Final, the Healthy Scratches opened the scoring near the end of the first and the rest of the game featured good goaltending and stellar defense before the Scratches finally put it away midway through the third, winning 3-0. The undefeated Healthy Scratched are the 2016 April Fools Champs thanks to a pair of goals from Isaac Waugh. 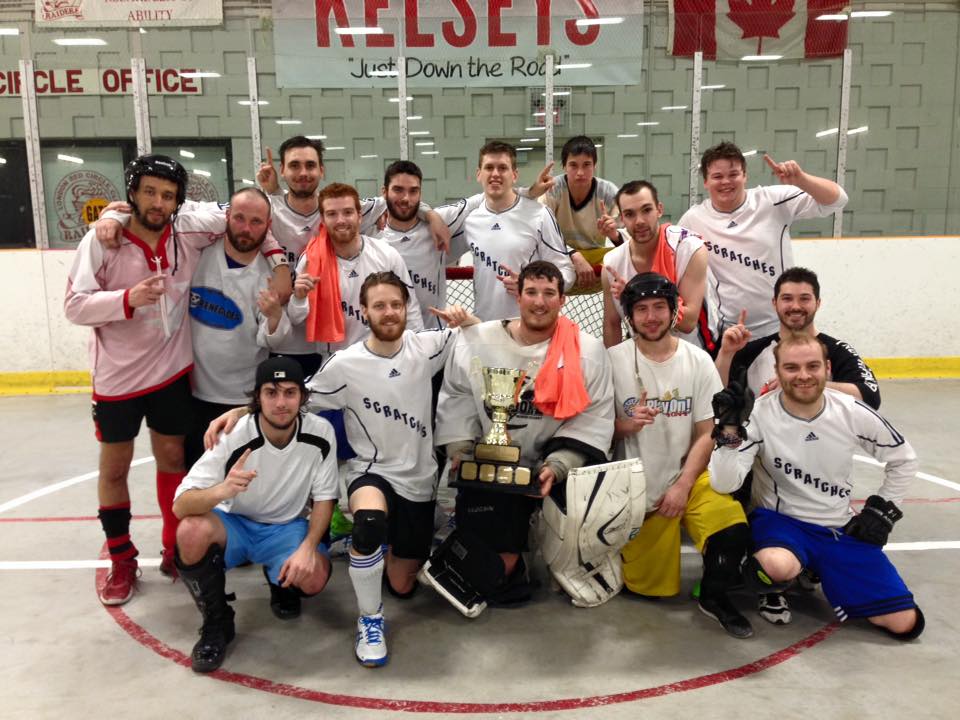 The Barn Division saw the Hamilton Lightning (3-0-0) finish atop the standings with the End 2 End All-Stars (2-1-0) not far behind them. Things kicked off with a 1-1 draw between the South Kent Torment and the Lorne Ave Stars, followed by a 4-0 Ringers shutout over Thunder Buddies.
Quarter Final #1 saw the End 2 End All-Stars and the Hamilton Haze go to a shootout, with the All-Stars coming away with a 4-3 victory. Justin Hancock had a two-goal game for End 2 End and Jon Nicholson had a pair of assists for the Haze. Quarter-Final #2 saw the Lorne Ave Stars beat the South Kent Torment 4-1 after getting a 3-point performance from Cody Hallett.

The Stars then went on to face the top seeded Hamilton Lightning in Semi-Final #1. The Lorne Ave Stars were never really in this game as Hamilton scored early and often on route to a 7-2 victory. Mike Galan had a massive game with 2 goals and 3 assists, garnering him First Star honours. The End 2 End All-Stars squared off against the Ringers in the second Semi-Final and the Ringers also won by a score of 7-2. PJ Fulsom had 2 goals and 3 assists and Nolan Girard had 1 goal and 4 assists for the Ringers.

The Barn Division Final was set for the Hamilton Lightning and the Ringers and, while they put up big numbers in their semi-final games, this one was a low scoring game. Hamilton’s Michael Rosati opened the scoring in the first period and Nolan Girard answered for the Ringers in the second. The final frame solved nothing, and the game fittingly, headed for OT. The Hamilton Lightning saw a major challenge to their ability to take home the throne when their starting goaltender went down with an injury to start the OT period. The Lightning were able to suit up a replacement in under the 5-min allotted time frame, and in the end Aaron Di Carlo was able to secure the victory for the Lightning as he scored the winner 6:41 into the first OT frame, earning a 2-1 Lightning victory. Hamilton’s Wes Morrison was named the game’s First Star. 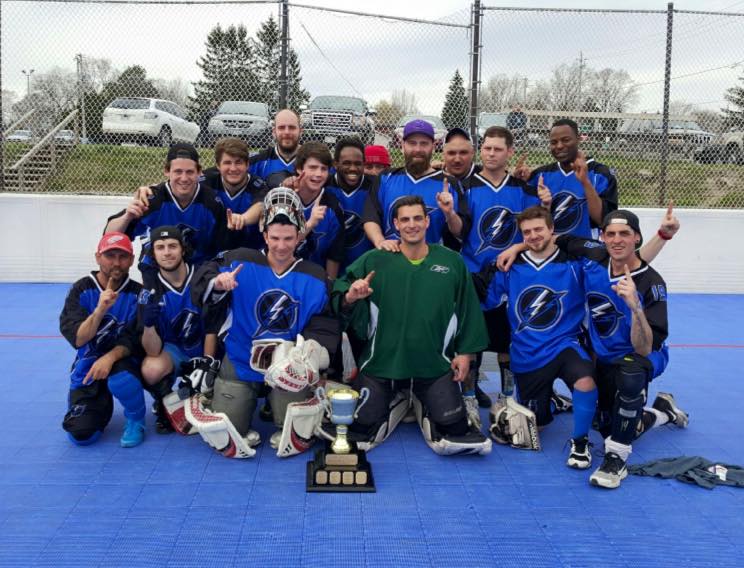